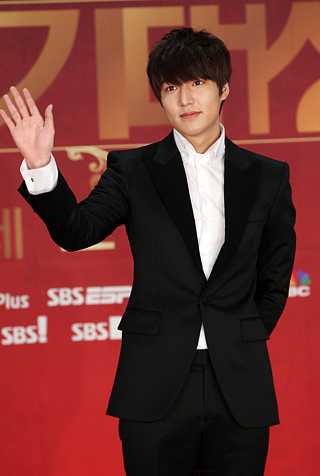 Actor Lee Min-ho won an award from the Ministry of Health and Welfare for his contribution to society, according to his talent agency, MYM Entertainment, on Tuesday.

During the ministry’s first “Sharing Happiness Ceremony,” which took place at the Sejong Hotel in Jung District, central Seoul, on Tuesday, the TV personality was recognized for his good deeds such as donating 100 million won ($87,000) following the Nepal earthquake in 2015 and taking part in a campaign run by Unicef.

Lee was the only celebrity to have been awarded the prize out of the 40 recipients. The Hallyu star is a member of Unicef’s Honors Club, which consists of those who have made large contributions to help protect children throughout the world and also to encourage others to make donations.

Lee is scheduled to star in a new movie titled “Bounty Hunters,” which will hit theaters on July 1.

The actor will also take part in a new TV drama series tentatively titled “Legend of the Blue Sea” alongside actress Jun Ji-hyun. The drama is scheduled to air around November.