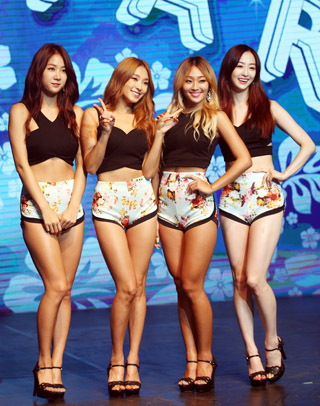 K-pop girl group Sistar’s title song, “I Like That,” for their latest mini-album, “Insane Love,” topped in six major music charts including Mnet, Monkey3 and Naver Music as of 8 a.m. Tuesday.

The mini-album, which includes six different songs, was released at midnight on Tuesday. A few of the songs’ titles other than the title track include “Yeah Yeah” and “Say I Love You.”

The latest title song is an upbeat dance track that revolves around a woman who falls in love with a man even though she knows that he will not treat her well.

Sistar’s comeback was highly expected by many of their fans in that the girl group has been topping music charts with their summer albums in the last few years. The group was recognized for their summer tracks “Shake it” in 2015 and “Touch My Body” in 2014.

The K-pop girl group debuted in 2010 with the mini-album “Push Push.” Since then, the four members have released numerous hits such as “Loving U,” “Ma Boy” and “Give It to Me.”