At Heatherwick Studios, an iconic eccentricity

At Heatherwick Studios, an iconic eccentricity 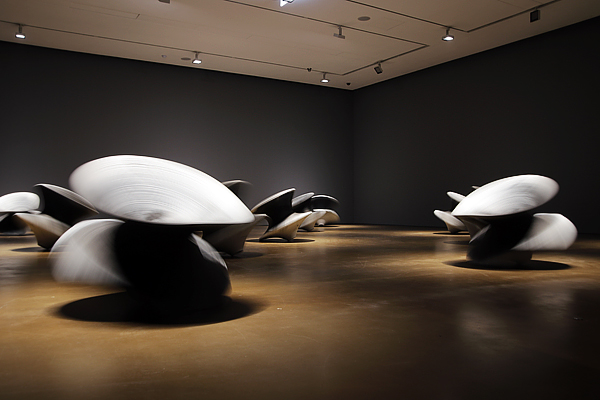 “Spun-Hula!” exhibited on the top floor of the museum is a set of automatically spinning versions of Heatherwick Studio’s Spun Chairs that were commissioned by D Museum for the exhibition. The chairs stop spinning when visitors approach it to take a seat.

How do you pick a project that embodies the signature style of British designer and architect Thomas Heatherwick?

There’s his Rolling Bridge across Paddington Basin in London that slowly and smoothly curls from a conventional straight bridge into a circular sculpture. Then there’s the award-winning and hallucinatory spiked UK Pavilion for the Shanghai Expo in 2010. What about the 204 copper pipes bent into petals to create the 2012 London Olympic cauldron?

The list of iconic works by Heatherwick and his team at the Heatherwick Studio based in King’s Cross in London doesn’t stop here. But a quick scan of his dozens of projects scattered across the world shows a body of work so distinct that it’s hard to pin down what, exactly, characterizes a Heatherwick.

Perhaps that very uniqueness is the 46-year-old designer’s signature, evidence of an artist who finds no fun in designing something that already exists.

Seoulites have a unique opportunity to witness that innovation in person at a large-scale exhibition displaying extensive archive of 1:1 scale prototypes, models, test pieces, drawings and photographs, titled “New British Inventors: Inside Heatherwick Studio,” that kicked off last week at the D Museum in Hannam-dong, central Seoul.

Curated by Kate Goodwin, Drue Heinz Curator of Architecture at the Royal Academy of Arts in London, the exhibition has toured different cities around the world, but according to the museum, the version for Seoul is a little different.

“D Museum’s distinctive characteristics have been added to the exhibition such as the museum’s unique space,” said Koh Hee-kyung, a senior PR Curator of the museum. “Even his famous spun chairs have been specially produced for this exhibition to spin automatically.”

Called the “Leonardo da Vinci of our time” by British design guru Sir Terence Conran, Heatherwick is considered a genius by many.

The designer himself, however, is not among them.
“I don’t think there’s such thing as a genius,” said Heatherwick, who made his first visit to Korea for the opening of the exhibition last Thursday. He added that the secret to Heatherwick Studio’s innovation is its meeting tables, where their team engage in a cycle of developing ideas, testing those ideas, arguing about them and then cutting them down until they are satisfied.

According to an interview with Neil Hubbard, a project leader at the Heatherwick Studio, screened as part of the exhibition, Heatherwick Studio has been successful because its culture makes all its designers feel as though they are part of a very unique and special project.

“There’s an open culture of thinking ‘there isn’t a bad idea’ established at the Heatherwick Studio,” said Hubbard, adding that anyone can express their thoughts freely at work.

This video clip featuring interviews with some of the 180 architects, artists and designers who make up the company, gives a behind-the-scenes look at Heatherwick Studio and is the first thing visitors to the exhibition see.

The exhibition is divided into three sections. According to curator Goodwin, visitors are first invited to the “Thinking” section where they are introduced to the studio’s unique thought processes, in which core concepts are identified through exhaustive questioning and critique. Then, at the “Making” section, visitors can witness how the studio experiments with materials and processes to transform ideas into reality. The final “Storytelling” section shows how the studio aims to imbed an idea in a form to leave a powerful impression.

The first section also includes background on how Heatherwick established his studio in 1994, shortly after graduating from the Royal College of Art.

Growing up under a mother who was a jewelry designer, Heatherwick characterizes his childhood as being “brought up around people who made things.”

“To get to my parents’ bedroom, I had to walk through my mother’s workshop where she had kilns, tools, jewelry making materials and toxic chemicals and so on,” said Heatherwick at the opening. “That was the only way I could get into my parents’ bedrooms. So with her, I went to a lot of exhibitions and craft shows, met with glass blowers, cabinet makers, weavers and all those people who made things.

“But as I became a teenager, found that the world of design buildings had become disconnected from making because there weren’t opportunities to make,” he added. “So I got interested in how you cross that divide between ideas and actually making things happen. So when I went to college, I researched the making experience in the world of architecture. Back then, architecture students never made anything. They never mixed any concrete, they never made a brick, they never made joinery.”

According to Heatherwick, the architecture world in the 1980s was in dire straits because out-there ideas were deemed unfeasible and few people were funding creative projects.

“[In the] world I had been seeing, every idea you have, you make it,” he said. “Even if it turns out to be a bad design, you learn from it.”

That kind of fearlessness has meant that nearly all of Heatherwick Studio’s works are considered one-of-a-kind. To come up with such innovative ideas, Heatherwick and his team start off with questions that range from the humanistic (e.g. “How can design help people to live in a better environment?”) to the most basic (“What are the problems of existing designs?”).

It was that process that led to the design of the cauldron for the 2012 London Olympic Games, explained in the Storytelling section.

“That was an interesting moment in thinking about design,” recalled the designer. “We started off with a question: Of all the previous Olympic Games, which cauldron do you remember?”

“We realized that what people remembered is people and moments, not the design of the cauldron,” he said, adding that it didn’t matter to the audience whether or not the cauldron was uniquely designed.

“What people remembered is the people and the moment, like the 1992 Barcelona cauldron lighting for the Paralympics when the archer lit the Olympic Cauldron by shooting an arrow.” 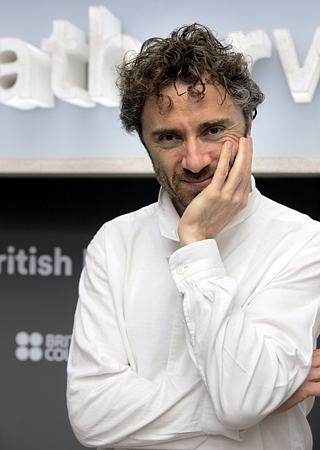 Heatherwick started thinking outside the box, about how design could be married with experience.

The team decided on a dandelion-like design composed of 204 petals, each representing a competing nation. The flaming petals, attached to long pipes, were brought into the center of the arena by each team as a part of the athletes’ procession, creating the big flame in the arena’s center instead of high atop the stadium.

“The Olympic cauldron is very symbolic. It’s like a religious ceremony and very emotional. It brings people together into one place for two weeks and it’s like the last thing that gives permission for the games to happen,” said Heatherwick, explaining why he opted for 204 separate petals instead of one monumental cauldron.

“On the other side, selfishly, we didn’t want to design a permanent cauldron to sit in on the roof of the stadium where pigeon poo accumulates for years,” he added.

The 204 petals, without the poles, were later given to each country.

But out of all the uniquely innovative creations by the Heatherwick Studio, the most familiar for Korean audiences will be the Spun Chair, which has long been a feature of the Dongdaemun Design Plaza in central Seoul.

The chair garnered much attention when it was first introduced in 2010 for looking more like a sculpture than a seat. But it surprised users for being so comfortable, functional and even fun - allowing people to rock from side to side or spin around.

Especially for the exhibition in Seoul, Heatherwick Studio is introducing its newest work “Spun-Hula!” - a set of automatically spinning spun chairs, each with different characteristics, as an artistic installation commissioned by the D Museum.

To encourage Koreans to test out the chair, Heatherwick demonstrated during the press opening on Wednesday it’s safe to approach the perpetually spinning chairs because they stop as soon as you try to sit down.

“Each of these chairs has a little magic mechanism inside it so it hulas,” said Heatherwick, doing a little hula with his body. “But if you go up to it and sit on it, it turns off… and then you can spin around, like this.”

The exhibition runs until Oct. 23. Tickets cost 8,000 won. The museum is closed on Mondays.

From left to right: Heatherwick’s Olympic cauldron designed for the 2012 London Olympic Games, which features 204 copper petals representing each competing nation; a model of the award-winning U.K. Pavilion for the 2010 Shanghai Expo exhibited in the D Museum; a computer-generated image of the Garden Bridge, a pedestrian bridge over the River Thames in London designed by Heatherwick that’s estimated to be completed in 2018. [D MUSEUM, ARUP]