Your jar of coins is costing Korea

Your jar of coins is costing Korea 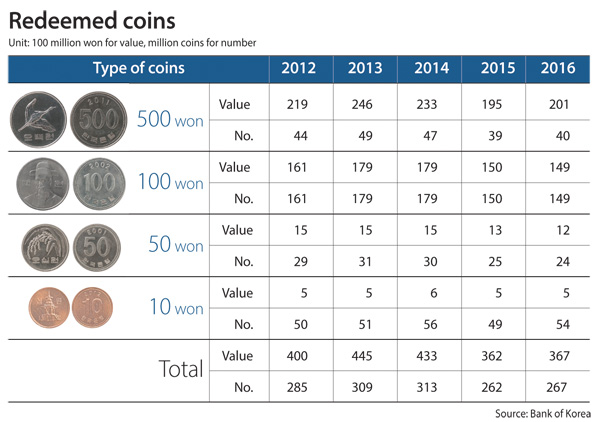 Where are Korea’s 100-won coins? And what are people doing with them?

The Bank of Korea (BOK) said Tuesday the number of 100-won coins collected during a national campaign to put coins in old jars back into circulation dropped significantly this year compared to last year.

The total number of the particular coins brought back to banks in exchange for banknotes dropped to 149 million this year, continuing to fall from 179 million in 2014 and 150 million in 2015.

The central bank held a nationwide campaign to rein in idle coins in May in cooperation with the Korea Federation Banks, MG Community Cooperatives, National Credit Union Federation of Korea and Korea Post.

For a month, people brought in a total of 267 million coins worth of 36.7 billion won ($31.8 million) in value, to have them changed into banknotes, the institution said. The combine value of the collected coins rose 1.4 percent on-year.

The number of collected 100-won and 50-won coins have been declining in the most recent four years, the BOK noted.

“It is difficult to describe why because the number of new 100-won coins being minted is on the increase,” said Kim Gwang-myeong, head of money printing at the BOK. “We are assuming that 100-won coins are still being used widely.”

It would have cost the central bank 22.5 billion won to mint an equivalent amount of new coins, which is over 61 percent of the coins’ total face value.

Growing costs are one of reasons that the BOK is campaigning to do away with coins in the future. In response to the expanding mobile payment market and decreasing use of physical coins, the monetary policymaker is preparing for a transition to a “coinless society” by 2020.

Of the recollected coins this year, 39 million won will be donated to social welfare institutions, it said.