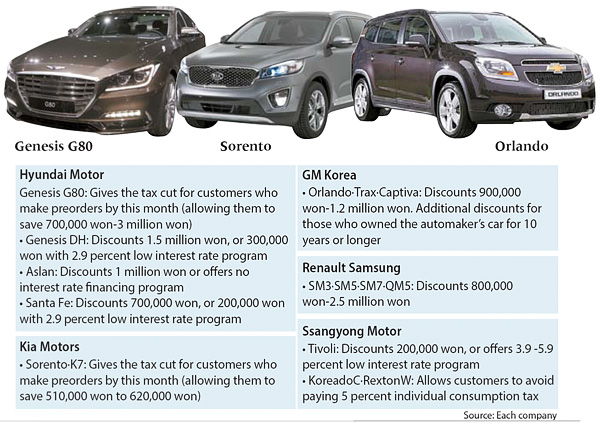 A 33-year-old man surnamed Choi preordered a new Genesis G80 last Wednesday. He wanted to test drive the car before deciding but instead signed the papers early, since the individual consumption tax cut benefit will finish at the end of this month.

As the tax cut is planned to come to an end this month, many automakers are announcing promotional events to attract as many customers as possible beforehand. Some of the promotional offers allow customers to receive the tax cut if they place orders in June, even though the car will be delivered the next month, as was the case for Choi. So customers can buy cars from 100,000 to 2.5 million won cheaper, depending on the model.

The government decided to cut the individual consumption tax levied on numerous luxury goods, including automobiles, in order to encourage spending. The cut actually ended late last year, but the government extended it to the end of this month.

Hyundai Motor said any of its customers who make preorders for its G80 models will enjoy the tax cut. Those who purchase the 3.3-liter (0.9-gallon) model will be able to save 900,000 to 1 million won, and those who buy the 3.8-liter model will pay 1.1 million to 1.3 million won less.

People interested in buying the Genesis DH, the previous-generation model, can either choose to have 1.5 million won taken off the price tag, or have 300,000 won discounted along with a 2.9 percent annual interest rate financing plan.

For those who owned a General Motors car for more than 10 years and are thinking about buying one of the three models, they are eligible to receive an additional 300,000 won discount.

General Motors Korea does not offer a tax cut for its Spark models, but it will either reduce the price by 800,000 won or include an LG refrigerator. Customers purchasing Renault Samsung Motors’ SM3, SM5, SM7 and QM5 models will get 1 million won, 2.5 million won, 800,000 won and 2 million won discounts.

For the SM6 models, the automaker will only offer low interest rate programs near 4.9 to 6.5 percent.

Ssangyong Motor will lower its Tivoli price by 200,000 won for those customers who decide to pay the full price in advance. For those who purchase the Korando and Rexton, the automaker will allow them to completely avoid paying the 5 percent individual consumption tax.

The company has also extended its warranty period from 5 years to 10 for its recreational vehicles.

Foreign automakers such as Mercedes-Benz, BMW and Toyota are planning to stop offering the tax cut benefit starting from July. Many industry insiders argue that the government needs to extend the tax cut.

A senior employee at one of the companies said Korean automakers will have a hard time competing with foreign companies due to the weakened Japanese yen and euro.

He added that the tax cut is a way to help local companies in the market.