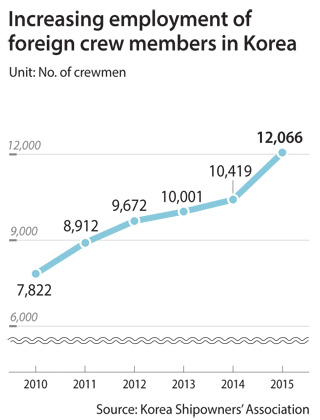 The alleged slaying of a Korean captain and an engineer by two Vietnamese crewmen aboard a deep-sea fishing vessel on Monday spread concerns that a similar mutiny could happen on other ships, as the number of foreign crewmen account for more than 80 percent of the staff on Korean ships.

“Captains and chief engineers are mostly Korean, but other than them, you can say it’s all foreign staff,” said Lee Byung-cheol, a director at the Korea Ocean Industry Union that represents laborers in the fishing industry.

“People say this industry is a ‘3D’ [difficult, dangerous and dirty] job, and Koreans have been avoiding work at sea, resulting in 80 percent or more of the crewmen being non-Koreans.”

Aboard the Kwang Hyun 803, the Korean-flagged 138-ton ship in the scandal, were 18 crewmen including seven Vietnamese, eight Indonesians and only three Koreans.

The Coast Guard said that around 2 a.m., two suspects killed the 43-year-old captain, surnamed Yang, and a 42-year-old chief engineer, surnamed Kang, aboard the vessel. The pair was said to be intoxicated.

There have been previous cases of foreign crewmen killing Korean sailors in mutiny.

“There can be misunderstandings between the head of the ship and staff, since language and cultural differences may come as a difficulty,” a Korea Shipowners’ Association spokesman said. “We should come up with ways to raise more Korean crewmen.”

The number of foreign workers has consistently grown since 1992, when the government consented to changes in the crew make-up as the industry faced shortages in the workforce.

The labor composition is similar on merchant ships. The captain, chief engineer and navigator are usually Korean, while the crew is usually from Vietnam, the Philippines and Indonesia. Labor unions and negotiators from outbound merchant ships have been discussing foreign crew employment since the 1990s and have expanded the number of foreigners allowed on board since 1991. At first, only three staff members were allowed. The number grew to six by 1995.

In 2007, the workers and company agreed that foreign crewmen can be employed, except in the captain’s position, on general vessels that are not designated as National Essential International Ships.

“Expanding the maximum number for maritime and ocean specialists could be an option to train more youths out of university, and expanding the current system of exempting crewmen from military duties after two or three years of working on board could be another,” the association spokesman said.