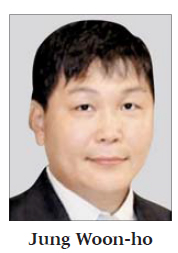 Kim Chang-ho, the managing director of Nature Republic, was newly appointed to the top executive post at a board meeting held early in the day.

The cosmetics company said that after deliberating on ways to stabilize the company’s management, which has been in a deadlock with Jung embroiled in an illegal gambling scandal last year followed by a string of additional violence and lobbying charges this year, the company decided to appoint a new CEO.

According to the cosmetics company, Kim has been in the industry for more than 30 years. He started his career at LG Household & Health Care in 1984, one of the leading beauty products companies possessing a wide span of brands such as The History of Whoo and The Face Shop.

The Face Shop is an industry-leading brand that Jung founded in 2003 but sold to LG’s cosmetics arm seven years later for 466 billion won ($404.6 million).

“Kim has a deep and wide understanding of the cosmetics industry, having been through the beginning and developing phase of brands,” a Nature Republic spokesperson said about Kim’s selection.

Nature Republic, which was founded under Jung’s leadership in 2009, experienced explosive growth with its nature-friendly products and extensive product lines with affordable price tags.

The fast-growing cosmetics brand was planning an initial public offering (IPO) last year but delayed it due to the CEO vacancy. With charges of violence and abusive language toward his attorney added this year against Jung, the IPO was delayed again in April.