Rollout to recycling: My life as a cellphone

Rollout to recycling: My life as a cellphone 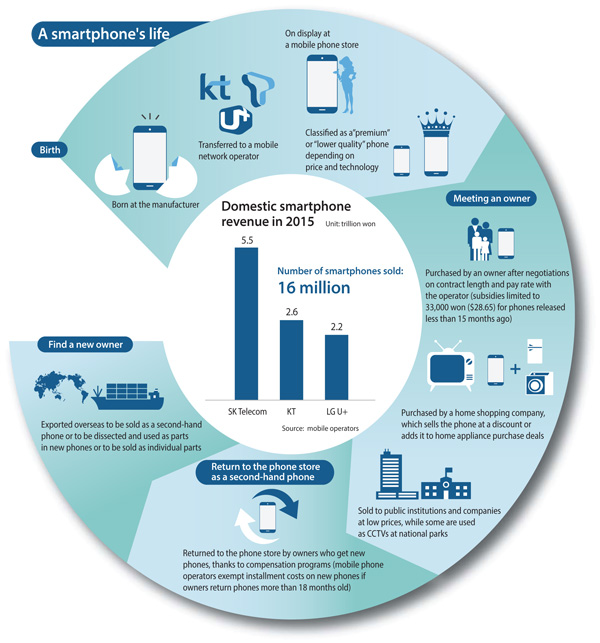 The following article is a first-person account of a smartphone. (They don’t call them smartphones for nothing.) Ed.

I am currently stuck in a small dark space along with my friends. I can occasionally hear a foghorn, so I know I am crossing an ocean. I am a secondhand phone, only two-and-a-quarter years old, being transported to Vietnam.

I was born in March 2014 and the whole world saw me introduced at the World Mobile Congress in Barcelona, Spain. Back then, I was a sensation; they called me a “premium phone” or even a “royal phone.” Yes, I was the king of all phones. The highest quality phones like me are born in the spring, while our younger friends are born in the fall to supplement our dwindling popularity as time passes. Those offspring are the large-screen premium phones like phablets and the lower-priced models based on some of my specifications.

I can still remember my birth at a telecommunications store in central Seoul’s Jongno District. The store manager bragged to customers, “We had to prepay to have this phone sold in this store.” There was apparently intense competition among phone carriers to obtain us, with over a thousand pre-orders received before we were even born! Tens of thousands of my friends met their new owner at birth. (“Royal phones” born these days are still very popular. Our friend, the Samsung Galaxy S7, quickly found 60,000 owners and the LG G5 15,000 in the spring.)

I was in the center of the store’s display area, illuminated by a bright light. I believed that I would soon find an owner, because my friends were gone in the blink of an eye. But I soon realized that not all phones released on the same date as other popular phones find an owner. After a short while, the store’s customers began to neglect us. The manager was whispering that even though I was only a month old, customers didn’t treat me as new. This made me lose confidence.

By fall 2014, I was pushed into the corner of the store and by that time, I heard some shocking news that would make it even more difficult for me to find an owner. A new law to restrict subsidies on phones was coming in October. Normally, telecommunication companies give our owners generous subsidies but with this new law, phones less than 15 months old would be allowed a subsidy no greater than 330,000 won ($284). When he heard this news, the store manager sighed, realizing that selling phones like me would be a challenge. But I found an owner in September. My owner wanted to change his phone before the new law was implemented.

I was fortunate that I found an owner, because my friends were not so lucky. They faced tough competition against the new phones released in the fall and the law restricting subsidies made customers shun them even more. Later, I met them as secondhand phones and they told me that once the new “premium phones” had come out in the spring, they were treated as second class. I saw some of them on TV, advertised as free phones on home-shopping programs.

Some of my phone friends were sold as bonus packages at home appliance sales, alongside refrigerators and washing machines. Others were given as gifts to people who signed up for Internet TV service, and some were bundled for sale to public institutions and corporations. I heard that some even became CCTVs, hanging on trees in national parks to monitor wildlife.

We’ve had very different lives but we gradually came back together as time went on. As we turned 18 months old, some of us began to go back to telecommunications stores to be labeled as “second-hand.” By returning us, our owners who had registered for a compensation program got a discount when buying our newly-born friends. Samsung Electronics has a Galaxy Club and LG Electronics a G Club that give discounts on new phones when members return their old phones. So some of our newly born friends will be returning after just a year of use when new models are released.

My friends that were returned to the store will emigrate, as I am currently doing. The Philippines, Vietnam and other Southeast Asian countries are popular destinations for us to find new owners. Do you want to know what will happen if I fail to find an owner there? If no one wants me, then I will be separated into my various parts. Some of my parts will be combined with parts from my friends and I will become a new phone, while my other parts will be discarded. Some people collect the gold within me. If you collect a ton of phones like me, you can collect 400 grams (14.1 ounces) of gold, the same amount as you find in 80 tons of gold ore. Pretty impressive!

As I sit in the cramped ship, my friends and I wonder what will happen to our premium phone friends in Korea. I heard that the law restricting phone subsidies may be amended to allow bigger subsidies regardless of my junior friends’ age. In any case, the law is supposed to terminate automatically in September 2017. This would allow owners to get the brand-new premium phones relatively cheaply.

The prospect of an amendment to the law means that the lower-quality phones to be released in the fall will be born in despair. Their popularity will plummet when the price of new premium phones drops. My friend, a Pantech SKY phone to be released today, is already nervous, and budget phones also fear for their futures. The government’s policies benefit some of us and harm others. This is our life as smartphones.