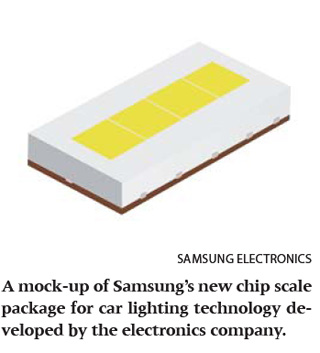 Samsung Electronics on Tuesday introduced smaller, simpler and flexible car lighting developed through a new light packaging technology of its own, the “Chip Scale Package.” It is a move to ramp up its auto parts business.

The flexible board frees up the lighting design options since metal wire that generally connects the diode and the board is now ridded in the new packaging system, scaling down the size of the product.

The tech giant said it already won orders from a global auto company to develop headlamps for its midsize sedan, though Samsung did not disclose the automaker.

It is the first time the company’s LED business inked a deal to supply parts to carmakers. The packaging can be utilized for a range of lighting for car exteriors, including head lamps and position lamps.

“The packaging process is simplified since the post-processes such as plastic molding is now gone and is more efficient as well, since ridded metal wire lowers the heat resistance of the lighting product,” a Samsung Electronics spokesman said. “This is opening up a new chance for the company in the light packaging sector, especially for car parts.”

The company first introduced a lineup of home lighting LED products produced through chip-scale technology at “Light + Building 2016,” the world’s largest lighting exhibition held in Frankfurt in March. It will push forward its businesses in the auto parts market through the new implementation of the technology on car lighting.

“The standard for lighting products in the auto industry is high, but we will lead innovation in the LED lighting sector [for cars] through constant research and development,” said Jacob Tarn, executive vice president of the company’s LED business department.

In December, the company announced it would join other global IT giants such as Google and Apple for connected and self-driving cars. The decision was a strong sign by industry insiders that Lee Jae-yong, vice chairman and heir-apparent of Samsung Group Chairman Lee Kun-hee, sees the business as a growth engine.