Number of students in start-ups is increasing

Number of students in start-ups is increasing 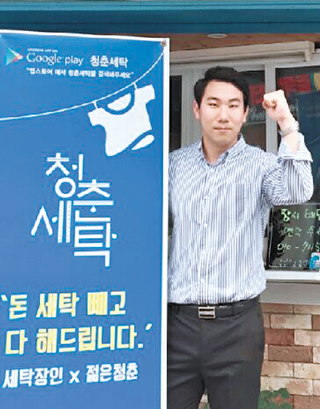 Lee Gi-tae, a student at Chonbuk National University, began a start-up delivering the clothes with his minivan between laundry shops and students in dormitory. [LEE GI-TAE]

With high unemployment rates and government efforts to encourage startups, the number of college students who are now considering running their own businesses is increasing.

Lee Gi-tae, a student at Chonbuk National University, in Jeongju, North Jeolla, was quick to react to his fellow students’ complaints. For students residing in the university dormitory, laundry shops were all too far away. Last March, Lee started a company delivering the clothes with his minivan to the shops and back to students. He was an instant hit with small laundry shop owners who were then being squeezed out of market by the bigger franchises. Word spread quickly among students, too, and in no time Lee was getting all the orders in the area.

He then developed his business model further by devising laundry management software that allowed his customers to then place orders using his smartphone application. “We hope to one day expand the business across the country,” Lee said.

Under President Park Geun-hye’s creative economy initiative, many startup-friendly programs have been implemented at the college level to encourage student entrepreneurs. As a result, the number of collegiate organizations associated with startups more than doubled over the past three years, totaling 4,070 on 2015, according to the Korea Institute of Startup & Entrepreneurship Development.

There are now around 200 colleges that have adopted policies allowing young entrepreneurs to leave school for a semester and have their startup experience counted as school credits.

“Despite the emphasis on startup training in college, the number of students actually into this area is low,” said Go Hyuk-jin, head of Korea Polytechnic University’s startup support department. “The startup experience can be a great asset for students, so if a student has an idea, they should go ahead with it instead of fearing failure.”

Experts advise entrepreneurs not to aim too high right out of the starting gates. For instance, Lee’s laundry courier service started with only a few laundry shops as partners. Lee capitalized on every opportunity that presented itself. He even hosted a small party to associate with shop owners introduce them to his business. As a result, he now has nearly 300 partner shops.

“Although I faced the occasional rejection from shop owners,” Lee said, “I wasn’t afraid to approach the next one, and shop owners were generally welcoming. I love talking to senior adults and I think that proved to be of great help.”

Kim Yong-tae, a professor at Namseoul University, said, “In the bigger context, running a startup is really about the process of discovering what you love to do. Gaining the experience of working with others is what makes a startup worthwhile.”

Owners of startup companies also stress the importance of recruiting the right people for the job. Lee Min-jeong, a computer science major at Sungkyunkwan University, recruited students for her travel application business. By forging a diverse group of fresh talent, she was able to devise a smartphone application that helps students easily find accommodation for membership training projects and also calculates the amount of required food for the given number of members. Already having secured partnerships with 250 accommodation facilities at popular sites, the application has built up a user base of 7,000 students.

“The first impediment for a startup is insufficient capital,” Lee Min-jeong said. “We started with a mere 350,000 won ($300) before entering startup contests, and not only were we able to give ourselves a significant boost, we also learned more about our business in the process of preparing for the contest.”

She added, “Whether you win or lose, startup contests are worth the effort even if only to get advice from straight from the experts.”

But Kim Yong-tae warns students of prematurely committing themselves without meticulous study, saying, “Students should avoid applying for loans and quitting school to develop a startup. Instead, they should first visit the startup center at their schools and listen to experts to understand the risks involved before prematurely throwing themselves into it.”