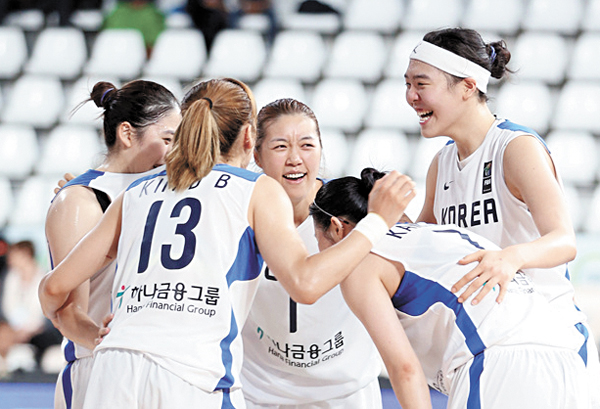 The Korean women’s national basketball team’s dream of making the Olympics has been shattered, as it suffered a devastating loss to Belarus on Sunday. However, there is a silver lining in every cloud. For Korean female basketball players, it is the newly discovered hope stemming from a successful generational shift.

When the buzzer went off on Sunday, Korean basketball players were speechless. The final score according to the scoreboard was 56-39. Their bid for the first Olympics in eight years was nixed.

The team’s loss to Belarus in the fifth-place playoff in the 2016 International Basketball Federation (FIBA) Women’s Olympic Qualifying Tournament in Nantes, France, on Sunday was the deal breaker. With two wins and three losses from the tournament, the team failed to place within the top five of the competition and was rejected a spot in the upcoming Olympics in Brazil.

No one from the team could stop crying after the match. “Why are you crying?” asked head coach Wi Sung-woo, trying to console his players. “Don’t cry. You played well.” But, Park Ji-su, the 17-year-old center who seemed unfazed during the tournament, seemed unable to control her emotion.

Notwithstanding, Korean women’s basketball witnessed the possibility for its future during the tournament.

No one, not even those in Korea, initially expected the team would make it past the group stage. Assigned to Group C along with Belarus and Nigeria, the prevailing expectation was that they would be eliminated from the tournament with two straight losses. Many of the stars that led the Korean women’s team in the past, including Lee Mi-sun, Sin Jung-ja and Beon Yeon-ha, have retired from the national team, forcing the squad to undergo a “generational shift.”

Even the Korea Basketball Association, the central governing body for the sport in Korea, was skeptical about the team’s success and made flight reservations on June 16 for the team’s returning trip, one day after the end of the first round of games. Complications regarding the players’ lodging were behind their decision as well, but the body essentially thought that the team would be ousted after the group stage.

Little did it know that the players were not going to dismiss themselves from the tournament after just two games. After suffering a reversal against Nigeria during the first game, the team edged Belarus in the next game by just one point, resuscitating a shot for the Olympics. Although they got knocked out of the quarterfinals against Spain, they defeated Cuba during the first match of fifth-place playoff to maintain their hope for the Olympics.

Although the hope was dismantled eventually by Belarus, at the center of Korea’s run stood the best five of the team, Yang Ji-hee, Kim Dan-bi, Kang A-jeong, Lee Seung-ah and Park. They filled the vacuum left by their seniors and put on a steady performance throughout the competition. Of course, the efforts by the team’s sixth women such as Kang Lee-seul cannot be neglected. The rising talent of Korean women’s basketball ensures the next generation can push ahead.

“Just how much longer will we talk about Beon or Lee Mi-sun?” said Wi. “Beon would not have played as well as Kang during this tournament.”

“I think the most invaluable benefit we take away from the tournament is that my players finally broke free from being under the shadow of the former stars,” added Wi.

The outcome of the tournament can attest to Wi’s statement. Throughout the five matches, Korea was able to see the real worth of players such as the young center Park, three-point shooter Kang A-jeong and key playmaker Kim.

“I will never play as helplessly as I did [during the last match against Belarus],” said Park at the Incheon International Airport on Tuesday. “If I were to put a number on my performance, I would only give 50 to 60 points [out of 100]. Four years from now, I am going to play better. We will work together to qualify for the Tokyo Olympics,” Park added.

The loss from the tournament looks like nothing but the growing pains as the young team turns their eyes to the next Summer Games.