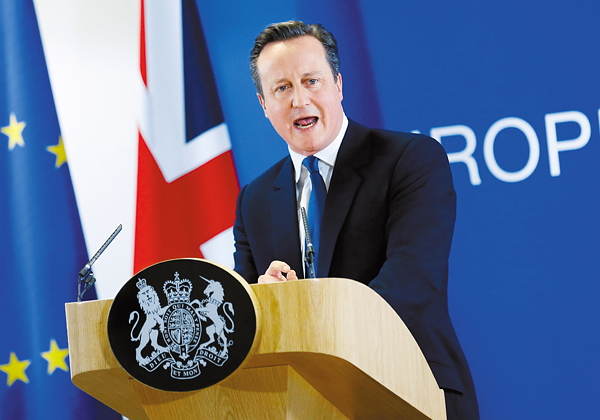 British Prime Minister David Cameron makes a speech underscoring a need for the United Kingdom to stay in the European Union at a summit in Brussels. [AP/NEWSIS]

MILAN — I do not believe that foreigners contribute usefully by issuing strong opinions about how a country’s citizens, or those of a larger unit like the EU, should decide when faced with an important political choice. Our insights, based on international experience, may sometimes be helpful; but there should never be any confusion about the asymmetry of roles.

This is particularly true of the British referendum on whether to remain in the EU. Just days before the vote, the outcome is too close to call, and there appear to be enough undecided voters to tip it either way. But, with political and social fragmentation extending well beyond Europe, outsiders may be able to add some perspective on what is really at issue.

First, it will come as no surprise that, in terms of the distribution of income, wealth, and the costs and benefits of forced structural change, growth patterns in most of the developed world have been problematic for the past 20 years. We know that globalization and some aspects of digital technology have contributed to job and income polarization, placing sustained pressure on the middle class in every country.

Second, Europe’s ongoing crisis has kept growth far too low and unemployment unacceptably high. And Europe is not alone. In the United States, while the formal unemployment rate has fallen, large-scale failures in terms of inclusiveness have fueled disenchantment at growth patterns and policies that seem to benefit those at the top disproportionately.

Given the magnitude of recent economic shocks, developed countries’ citizens might be less unhappy were there evidence of a concerted effort — based on genuine burden sharing — to address these issues. In the context of Europe, that would mean a multinational effort.

But, for the most part, effective responses have been missing. Central banks have been left largely alone with objectives that exceed the capacity of their tools and instruments, while elements of the elite wait for a chance to blame monetary policymakers for weak economic performance.

In the face of non-monetary policy responses that are somewhere between deficient and non-existent relative to the magnitude of the challenges we face, the natural response in a democracy is to replace the decision-makers and try something different. After all, democracy is a system for experimentation, as well for the expression of citizens’ will. Of course, the “new” may not be better and could be worse — perhaps significantly worse.

Third, the EU is confronting, in more severe form, a problem facing much of the developed world: powerful forces operating beyond the control of elected officials are shaping citizens’ lives, leaving them feeling powerless. But while all countries must deal with the challenges of globalization and technological change, important elements of governance in the EU are beyond the reach of democratic institutions, at least those that people understand and relate to.

This is not to say that local governance is problem-free. It isn’t. Corruption, special interests, and sheer incompetence are common problems. But democratic governance is in principle fixable, and institutional defenses and countermeasures do exist.

The situation in the eurozone is particularly unstable, owing to citizens’ growing alienation from a distant, technocratic elite; the absence of conventional economic adjustment mechanisms; and tight limits on fiscal transfers, which send powerful signals about the real boundaries of cohesion.

Brexit is a part of this larger drama. It is primarily about governance, not economics. From a strictly economic point of view, the risks for both the United Kingdom and the rest of the EU are almost entirely on the downside. But if that was all there was to the issue, the outcome would be a foregone conclusion in favor of staying.

Some Britons, and many other EU citizens, still want future generations to think of themselves as Europeans (albeit with a proud British, German or Spanish origin), and are prepared to take another shot at reforming Europe’s governance structures. And they are right to think that the world would be a far better place with a united, democratic Europe as a major force for both stability and change.

That would be a good outcome in the long run. It would require inspired leadership from all corners of Europe — including government, business, organized labor and civil society as well as a renewed commitment to integrity, inclusiveness, responsibility and generosity.

That is a tall order; but it is not an impossible one to fill.


*The author, a Nobel laureate in economics, is a professor of economics at New York University’s Stern School of Business and senior fellow at the Hoover Institution.
Michael Spence