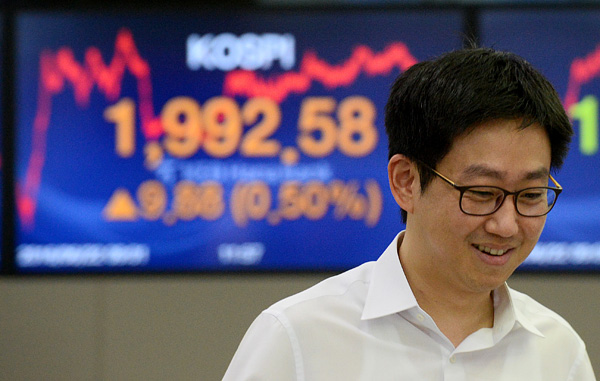 A display at KEB Hana Bank in Myeong-dong, central Seoul, shows the benchmark Kospi rallying 9.88 points from the previous trading day to close at 1,992.58 on Wednesday, a day before the British referendum on whether to leave the European Union. [NEWSIS]

A day before Britain’s referendum on membership in the European Union (EU), local investors and exporters showed scant concern about the possibility of an exit by the third-largest economy in the EU bloc.

Seoul’s main Kospi index rallied 0.5 percent on Wednesday compared to the previous trading day thanks to a buying spree by foreign investors.

“Investors seem like they have decided to wait until the result is out,” said a dealer at KEB Hana Bank.

Although the “leave” and “remain” camps are running neck-and-neck in British polls, Korean manufacturers aren’t really preparing for the worst.

Automobiles and petrochemical products account for the largest shares of exports to the EU under the Korea-EU Free Trade Agreement (FTA).

If Britain does leave the EU, those industries might demand the government sign a separate FTA with Britain.

Korea’s automotive and oil refining industries admitted they could suffer from a so-called Brexit, but said they were still highly doubtful that the United Kingdom would actually end up leaving the EU.

Hyundai Motor, the No. 1 carmaker in Korea, admitted that the U.K. has become a major market within the EU, with a surge in sales in the past couple of years.

But it is more concerned about the European market as a whole, and whether a British exit would lead to exits of other member countries.

“If Brexit happens, what worries us most is not the additional tariff on cars exported to the United Kingdom, but the effect it will have on the European market as a whole. We are looking at the matter from a long-term perspective,” a Hyundai Motor spokesperson said.

An insider from the tire industry said no detailed plans have been made since a Brexit would not immediately affect exports. “How the exchange rate turns out once the decision is made will be the biggest factor,” the industry insider said.

Korea’s oil refining and petrochemical industry also scratched their heads on what effect the vote will have on their companies.

“Exports to the U.K. is of limited concern to the petrochemical market,” a spokesperson for the Korea Petrochemical Industry Association said. “What should be considered is how oil prices will be affected. But there are so many variables, it is hardly possible to forecast that right now,”

If the “leave” camp triumphs, there could be an exodus of foreign funds invested in Britain, said Lee Jong-woo, research head at IBK Securities.

“If these huge funds start to move, the global economy could fall into chaos,” Lee said. “There is also a possibility of British funds invested around the world being pulled out, and this would affect Korea.

British investors are the second -largest foreign investor group for Korea, and this would cause the Kospi to fall.”

Meanwhile, Bank of Korea Gov. Lee Ju-yeol expressed caution about the Brexit issue and its possible effect on the Korean economy.

At a meeting on current economic trends with experts on Wednesday, Lee cited the possibilities of a Brexit and U.S. rate increases as external factors affecting the economy.