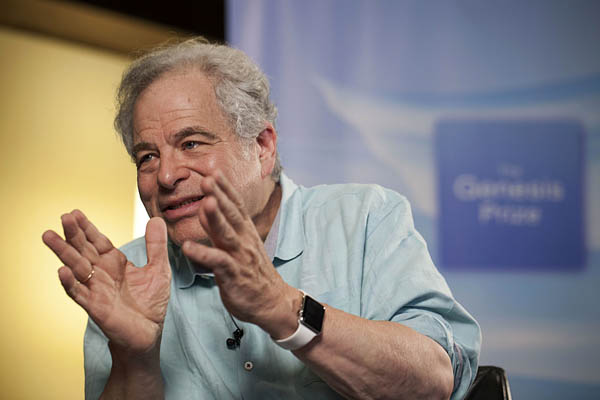 Violinist Itzhak Perlman talks during an interview with The Associated Press in Jerusalem on Tuesday. [AP/NEWSIS]

ERUSALEM - Violinist Itzhak Perlman, a longtime advocate for the disabled, is still upset over Donald Trump’s derisive behavior toward a disabled reporter last fall and says he will be supporting Hillary Clinton in November’s election.

The mild-mannered musician, who contracted polio as a child and uses an electric scooter to move around, said he tries to avoid politics but the current campaign is different.

Last November, Trump flailed his arms in what critics immediately said was an attempt to mock a New York Times reporter who suffers from a congenital condition that restricts joint movement. Trump has denied that, arguing he was actually mimicking a “flustered reporter trying to get out of a statement he made long ago.”

“Horrible, horrible, horrible ... That was a mindless kind of decision,” Perlman said in an interview with The Associated Press. “It was terrible. You don’t do that ... it’s so outrageous.”

Asked whether he would be endorsing a candidate, he said: “I’m just hoping that Hillary will do it,” adding that the situation will be “impossible” if Trump is elected.

It is not the first time Perlman has been drawn into a politically sensitive issue. Last month, he canceled a performance with the North Carolina Symphony to protest the state’s new law limiting antidiscrimination policies for LGBT people. He has said he will perform when the law is repealed.

The Israeli-American Perlman, one of the world’s most recognized classical musicians, is in the country of his birth to accept the $1 million Genesis Prize, known unofficially as the “Jewish Nobel Prize.” He was selected for the honor for his “exceptional contributions” as a musician, teacher, advocate for the disabled and dedication to Jewish values and Israel.

Perlman, 70, has won 16 Grammys, including a lifetime achievement award in 2008, and played the violin solo in John Williams’ Oscar-winning soundtrack for the 1993 film “Schindler’s List.” He has performed with or conducted the world’s top symphony orchestras, and has been a regular guest at White House events. Last year, he received the U.S. Presidential Medal of Freedom, the nation’s highest civilian honor.

Perlman is also one of the few classical musicians to enjoy broad crossover appeal. He has appeared on late-night comedy programs, Sesame Street and American public television programs. With his wife Toby, he helps run the Perlman Music Program for talented young musicians.

Perlman said the prize money will go to the two causes that are most important to him: music and empowering people with disabilities. He also said he has his eyes set on promoting music education in Israel. “We have got to make kids excited about classical music,” he said.

He said he would also promote the idea that “every person with a disability is an individual,” with their own sets of needs. He said society must do more to enable people with disabilities to utilize their strengths and realize their potential.

Perlman said he wants to be recognized as a great violinist - not as a musician with a disability.

“I don’t play the violin with my legs. I play it with my hands,” he said. “I’m supposed to be looked at according to my talent ... I’m sure that many people with disabilities who have certain talents would like to be looked at that way, not any other way.”

Prime Minister Benjamin Netanyahu is to present the award to Perlman at a ceremony in Jerusalem Thursday night that will be hosted by actress Helen Mirren.

The prize was inaugurated in 2014 and is run in a partnership between the Israeli prime minister’s office, the private Genesis Prize Foundation and the Jewish Agency, a nonprofit group with ties to the Israeli government. It is funded by a $100 million endowment set up by the foundation.