Underneath Seoul, a sprawling shopping web

Underneath Seoul, a sprawling shopping web 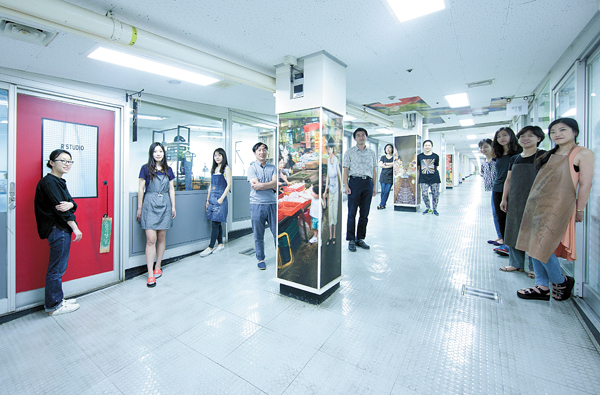 Young artists who have settled at the Sindang Underground Shopping Center, located in Hwanghak-dong, Jung District, central Seoul stand next to pillars showing holographic images of the salespeople who work at there. Many declining underground centers have gotten a boost from a new influx of young artists and entrepreneurs. [KWON HYUK-JAE]

Underneath metropolitan Seoul, there is another city consisting of 25 underground shopping malls linked to each other like strands of a spider’s web.

The very first underground shopping center, Saeseoul Underground Shopping Center, opened in 1967 near City Hall. More quickly followed, but the areas were hit hard by the 1997 Asian Financial Crisis, which slowed the stream of shoppers to a trickle.

Some, like the centers in the Jongno and Euljiro Districts of central Seoul, were forced to close. Still, the 25 that remain are home to an impressive 2,788 stores.

Marking the 50th anniversary of the launch of the first underground shopping center, the Seoul Metropolitan Government launched initiatives through the end of this year to reinvent the areas and encourage more visitors. The city is also experimenting with cheaply renting stalls to young artists or entrepreneurs with creative business ideas.

In order to get a glimpse of the changes happening, the JoongAng Ilbo recently headed underground for a visit.

From bomb shelter to shopping center

You wouldn’t think twice about the path in front of the Seoul Jungang Market, located in Hwanghak-dong, Jung District, central Seoul. It looks like an ordinary road, but at the end, a set of stairs leads to the Sindang Underground Shopping Center. First constructed as a bomb shelter for people during times of war, it reopened as a place for shopping in 1971.

The area is unusually long, with its end invisible from the entrance.

Past an initial crop of sushi restaurants, various craft shops come into view. Everything from action figures to porcelain and metalwork are on offer.

Some of the shopping center’s pillars display holographic images of different salespeople who work there, giving it the air of an art gallery.

In it’s heyday, Sindang Underground Shopping Center was busy enough to have three currency exchange offices. But by 2000, it had become unpopular, with nearly half of the mall empty.

The city government stepped in with a revitalization project in 2009, which has proven effective.

As part of the project, empty shops are rented to young artists who are charged only 10 percent of the average monthly rent at the center.

Artists are chosen by the city through a competition that gets tougher every year.

As of now, about 40 shops are run by artists both old and young.

Park Se-hong, who makes action figures, said, “One of the advantages working down here is I can stay focus on work regardless of the weather and I also like the fact that I can mingle with other artists.”

The center’s old timers initially opposed the idea of sharing the place with young artists, but many now say they’ve seen positive changes as a result.

“I feel like this underground shopping mall is rejuvenated thanks to them,” said Ham Hyeong-su, who has been operating a sushi restaurant there for the past 30 years.

With the addition of the artists, the Sindang Underground Shopping Center is able to provide hands-on programs for both tourists and locals.

During a recent visit, a class in chilbo was already underway. The traditional Korean technique utilizes gold, silver, copper and glass enamel, and is often used to make accessories for women.

“It’s so good that I can make an artwork while having a break down here,” said Park Eun-sil, 53, who was taking the class. She sells sundaeguk, a stew made from blood sausage, at the nearby Seoul Jungang Market.

Jongno 4-ga Underground Market near Gwangjang Market in central Seoul is also famous for its 10 shops run by young entrepreneurs in their 20s and 30s.

Some of the most popular are Morannabi Hanbok, which specializes in modern versions of hanbok, or traditional Korean clothing, and Dolim, which sells modern version of the knot accessories popular among women in the Joseon Dynasty (1392-1910).

Tailors and jewelry shops were mainstays at the center until the 2000s, when the introduction of more crosswalks meant pedestrians weren’t forced underground.

Still, there’s not a lot of foot traffic. Most of the young people promote their products through social-networking service and sell their wares at flea markets in hipper parts of the city, like Itaewon and the neighborhood around Hongik University, in downtown Seoul.

“I resort to Internet when selling products because people rarely visit [the underground shopping center],” said Gang Gyeong-ri, the head of the Morannabi Hanbok.

Euljiro Underground Shopping Center, stretching 2.8 kilometers (1.7 miles), is the longest in the nation.

It was constructed in 1983 when the city built subway Line No. 2. The center runs all the way from City Hall to Dongdaemun Design Plaza.

The area is popular during extreme weather, including earlier this month when the mercury neared 30 degrees Celsius (86 degrees Fahrenheit).

The center has a diverse selection of shops. On a recent walk to Euljiro-1ga, vendors selling vintage goods seemed particularly popular. One offered retro typewriters, another a vast selection of LPs.

Nearby, a portrait studio was filled with the faces of famous figures like the late cardinal Kim Sou-hwan and Kim Koo, who fought for Korean independence in the early 1900s.

Kim Jin-sam, who has been running the studio for three decades, was drawing a middle-aged woman.

“I’m working on this at the request of a man who wanted to have a portrait of his deceased wife,” said Kim. “I used to draw portraits of presidents and politicians, but now I see more ordinary people who want to have portraits of themselves because they think portraits are different from photos.”

One of the underground passages links Euljiro 3-ga and Euljiro 4-ga Stations - all part of the shopping complex - is jungle themed and lit with green LEDs.

A short walk from Euljiro-1ga Station are the Namdaemun and Hoehyun Underground Shopping Centers.

The latter has become a favorite spot for collectors of old stamps or vintage film cameras.

Seoul Metropolitan Facilities Management Corporation, which is in charge of managing underground shopping centers, plans to create cultural spaces where budding musicians can perform and a rest area at some centers by the end of this year.

The first part of the project, which connected Gwanghwamun and Jonggak, was unveiled to the public on May 25.

But a proposal to connect the underground parts of Namdaemun Market and Sogong-dong Underground Shopping Center in Sogong-dong, Jung District was turned down by the city for lacking business value.

“I have a few regular customers, mostly seniors, but they find it hard to drop by the store because of stairs,” said Ryu Yong-bok, the head of Milan, the hat store he has run at Sogong-dong Underground Shopping Center for 20 years.

Jung District, which contains popular shopping areas like Namdaemun Market, Myeong-dong and Euljiro, has proposed linking all key shopping spots through underground passages, but the city has remained reticent.

“There are heaps of problems to be solved. One issue is conflict between sales people below and above ground.”

Another issue to be tackled is air quality inside underground shopping centers.

“I moved my shop from underground to above ground recently because I felt stuffy inside the underground shopping center,” said a salesman who requested anonymity. “The entire environment needs to be improved if they want to have more customers than now.”