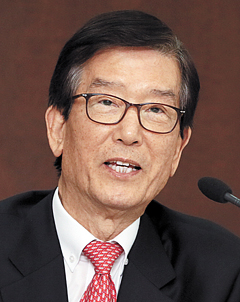 Lee Dong-geol, chairman of Korea Development Bank (KDB), said Tuesday that he would be cautious in deciding whether to give additional financial backing to the struggling Daewoo Shipbuilding & Marine Engineering (DSME).

At a meeting with local entrepreneurs, the head of the government-run financial group said he had not yet decided whether he would provide more cash or help DSME in some other manner, adding that the bank is studying the matter closely.

Lee did not suggest, though, that the bank was considering pulling the plug on its support of the shipbuilder in general.

The bank is the largest creditor of DSME.

Last October, KDB said it would release 4.2 trillion won ($3.6 billion) to DSME to help it stabilize. The bank predicted at the time that DSME would mark about 6.2 trillion won in losses in 2015 alone.

The bank has contributed 3.2 trillion won since then, but it has not released the remaining 1 trillion won. Other media outlets have reported suggestions that the money would not be forthcoming.

The beginning of a prosecution probe into the shipbuilder to determine whether accounting fraud was a factor in the company’s massive losses has supported those rumors.

There are also allegations that a former employee embezzled $15.4 million in DSME funds.

The Board of Audit and Inspection complained last week that KDB was responsible for the debacle at the shipbuilder, saying in particular that the bank’s analytical system established in early 2013 to detect irregularities in balance sheets had failed in its purpose.

“There were some things that we should have done better, and I regret it now,” Lee said.

KDB will brief the press today and could announce more plans for handling DSME and other corporate restructuring projects in this country.

Lee also spoke Tuesday on the roles of KDB and midsize companies in helping Korea’s economy.

At a forum hosted by the Association of High Potential Enterprises of Korea in Seoul, he said it was time for midsize companies to take a larger role in entering foreign markets and expanding investment in research and development projects. He called such steps necessary to help the economy recover from its long stagnation.

Earlier this year, KDB announced that it had funds amounting to 23 trillion won available for large and medium-size companies to use in improving their competitiveness.

Lee said the bank would help companies financially by expanding the number of enterprises eligible for lower loan interest rates and exempting them from some loan service charges.