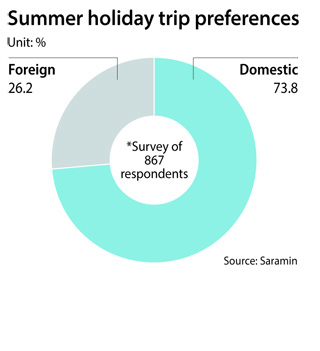 Summer is approaching, and Koreans are either headed for a cheap holiday trip around the country or looking for discounts on an overseas trip, according to SK Planet, operator of the online shopping mall 11st on Wednesday.

“A declining economy led to shrinking consumption, and cost-efficiency has become a hot keyword for this year’s summer,” a spokesman from SK Planet said.

The company analyzed data from social networking services and spotted an increasing trend of Koreans eyeing budget plans for their holidays. It has pushed many vacationers to domestic locales this year rather than to overseas destinations.

Saramin, an employment portal, conducted a survey of 867 workers and learned that 73.8 percent were planning a domestic trip while the rest were packing for a trip abroad.

Among those eyeing domestic destinations for a holiday, 33.4 percent picked Gangwon as their preferred destination, followed by Jeju Island (23 percent) and South Gyeongsang (21.1 percent).

A preference for domestic trips has led to higher sales of domestic accommodation packages. Through last week, sales of summer holiday room packages offered by the nation’s hotels and resorts increased 109 percent on the 11st site.

Reservations for hotel rooms at popular destinations like Gangwon and Jeju have doubled compared to last year.

Those planning on overseas travel were also hunting for affordable options. Sales of cheaper tickets on low-cost carriers increased 46 percent year on year, according to 11st sales data.

Customers tended to be more interested in keywords such as “special sale” and “discount coupons” when booking flight tickets compared to their behavior in past years. There were 3,130 mentions of such key words last year on social networking sites, but the interest grew to a record 7,994 mentions this year, a 155-percent increase.

Nearby countries are the favored holiday destinations. Saramin’s survey showed that Southeast Asian countries including Thailand, Malaysia and Indonesia were the most favored selections of those planning overseas trips, followed by Japan, Hong Kong, Taiwan and Macau. More distant countries such as the United Kingdom, France and Germany interested only 3.5 percent of travelers.

Most Koreans will leave for holidays beginning next month. While 33.4 percent said they would leave in the first week of August, the last week of July and the second week of August were also picked heavily as preferred departure dates, Saramin said.

Average spending on holidays is expected to be about 750,000 won ($650). Domestic travelers plan to spend about 540,000 won for their holidays while those headed overseas have budgets exceeding 1.3 million won.

“Last year was a tough one for the tourism industry due to the outbreak of Middle East respiratory syndrome, but we expect the situation to be different this year,” the SK Planet spokesman said. “Early birds preparing cheaper holiday plans are increasing in the country.”