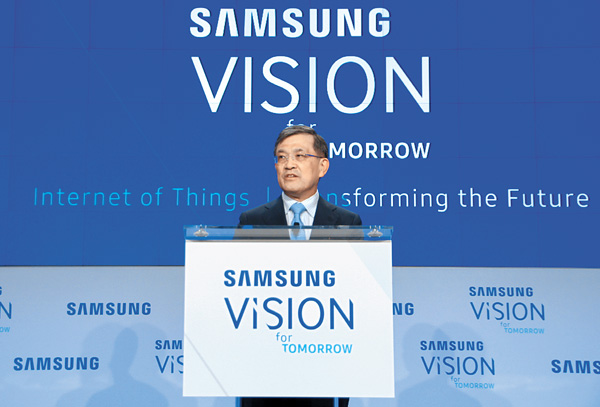 Kwon Oh-hyun delivers a keynote speech on the Internet of Things at a Samsung-hosted forum in Washington on Tuesday. [SAMSUNG ELECTRONICS]

Samsung Electronics plans to invest $1.2 billion in Silicon Valley to develop technologies related to the Internet of Things and is stepping up cooperation with early-stage start-ups in related fields over the next four years, Kwon Oh-hyun, vice chairman and CEO of Samsung, said on Tuesday.

IoT, a technology that connects physical objects through the use of embedded sensors, actuators and other devices that collect and transmit information about the objects, is seen as one key growth engine for Samsung, particularly in providing the semiconductors that go into the components. Transmitting information across the networks requires innovations such as highly integrated microchip designs.

The announcement was made in Washington where Intel and Samsung announced the National IoT Strategy Dialogue, an initiative to convene like-minded industry partners such as Apple, Google and Samsung and organizations to develop strategic recommendations for U.S. policy makers on the IoT. A private U.S. trade association called the Information Technology Industry Council will be in charge of managing the new entity.

“We look forward to working with Intel, ITI and other stakeholders to find a collaborative path forward in bringing the transformative benefits and solutions of IoT to scale,” Kwon said in a keynote speech at a Samsung-hosted forum in Washington.

About 300 U.S. policymakers and industry experts participated in the forum.

Doug Davis, senior vice president for IoT at Intel said: “The National IoT Strategy Dialogue is consistent with the goals of the pending “Developing Innovation and Growing the Internet of Things (DIGIT) Act” and as a co-founder, Intel is pleased to help drive this important technology transformation in the U.S.”

For IoT to spread innovation across society and to boost its influence, the technology should be centered around humans and prioritize openness and collaboration, the Samsung vice chairman said.

“At Samsung, putting people at the center of everything we do is our highest value,” said Kwon. “The same must be true for IoT if we want to realize its full transformative power. Today, IoT is changing individual lives -- helping people to age in their own homes. But tomorrow, using IoT, we can give the same independence to millions of Americans. We can keep people out of hospitals and nursing homes. As people live longer, these benefits and cost savings for society cannot be ignored.”