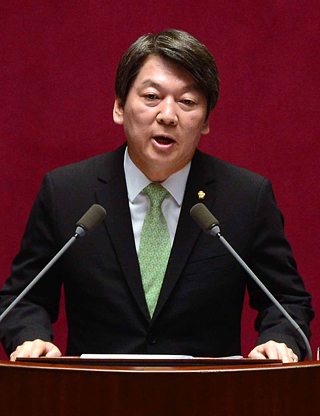 Rep. Ahn Cheol-soo, co-chairman of the minor opposition People’s Party, presented a speech to the National Assembly on Wednesday proposing to found a special commission for future job creation for youth.

Every so-called negotiation bloc in the legislature, which refers to parties with more than 20 lawmakers, is given the opportunity to make a speech at the first extraordinary and regular sessions each year. The People’s Party is the third and last such bloc to speak.

Ahn’s speech began with the story of 10-year-old Yoon Chae-yeong (alias), a fourth-grader at the Sinjung Elementary School in Seocho District, Seoul.

The case of the schoolgirl was used to illustrate the dependency of the older generation on the younger.

“Thirty years from now, Yoon and her friends may have to support an older generation twice their number.”

More than half the speech centered on the rapid decrease of working-age population and the policies to counter this.

Ahn also linked this looming demographic cliff with the so-called “fourth industrial revolution,” a term referring to the future trend of cutting-end technology such as artificial intelligence, robotics and bioscience.

“The fourth industrial revolution is like a giant wave rolling toward us even now,” he said. “In the coming age, we need to propel three more such revolutions (science and technology, education and entrepreneurship).”

To achieve this, the legislature needs to establish a special commission for future job creation, Ahn said.

“The commission will develop long-term guidelines on how much and where human resources and government budgets should be invested.”

This special commission was part of his pledge during the past general election.

Ahn also said that society will have no tomorrow if the privileged do not lay down their vested interests. He urged the Assembly to strategically resolve public-civil, chaebol-subcontractor and generational inequalities, starting with its own members.

“We should lay down privileges and aids that come with our positions if they make us more than mere representatives of the people. I would like to ask the speaker to form a commission to formulate this initiative.”

He added that to solve income distribution issues, unfair trade practices between chaebol and their affiliates should be rooted out.

Ahn did not make a direct apology for the recent kickback suspicion on Rep. Kim Su-min, the newly elected proportional representative of the People’s Party, but he did express “deep regrets” that the Assembly has not done its duty so far.

“The Assembly should worry before the people worry and only laugh after the citizens are happy.”