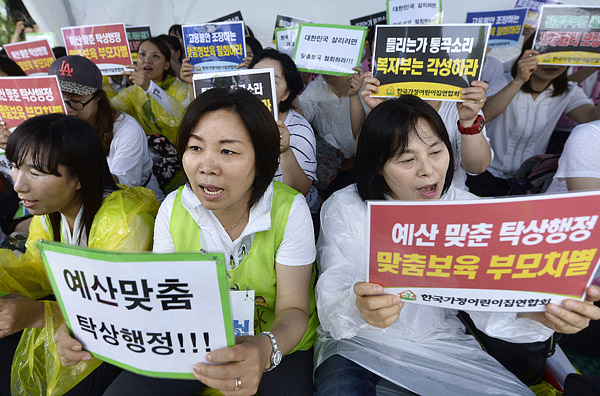 On the eve of a planned strike by day care centers nationwide, the government warned Wednesday there would be strong punitive measures, calling their protest against a new policy unlawful.

The Park Geun-hye administration recently revised its free day care program for toddlers and said the new plan will take effect on July 1.

All children up to 36 months old are currently eligible for 12 hours of free child care from 7:30 a.m. until 7:30 p.m., but the new program will divide children into part-time and full-time groups.

Under the new policy, children from families whose parents are both working full-time will be eligible for the day-long program. Children with more than two siblings are also eligible for full-time care.

Children from single-income families will be offered part-time day care for up to six hours. The part-time program will receive 20 percent less funding from the government under the revised plan.

Stay-at-home mothers have strongly criticized the plan as discriminatory.

After day care centers nationwide said they will go on strike on Thursday and Friday, the Ministry of Health and Welfare talked to the heads of their lobby groups to avoid a massive child care shut down. As a result, some centers postponed their walkout plans.

The Korea Family Child Care Center Association said Wednesday it decided to retract its strike plan and is awaiting more talks with the ministry.

Nurseries in the association look after children up to 36 months old, and each facility has no more than 20 children.

“The government said it will reinforce the policy before it takes effect on July 1,” said Kim Ok-sim, head of the association. “Instead of making the drastic decision to strike, we want to contemplate the issue further.”

The association said government subsidies must remain the same whether children are in the full-time program or the part-time program.

The Korea Edu-care Association, the largest lobby group of nurseries, said it has no plan to strike, but it also said it will stage a walkout if the government does not revise the plan.

The Korea Private Child Care Center Association still said their members will close operations on Thursday and Friday, as planned. The day care centers under the association are for children up to five years old, and about 10,000 facilities are expected to participate in the strike.

Health and Welfare Minister Chung Chin-youb said Wednesday that strong punishments will be handed down to day care centers that participate in unlawful strikes.

Under the Infant Care Act, nursery operators are not allowed to take a day off based on their own discretion. If they do, punitive measures such as the shutdown of the business can be handed down.

In order to avoid such punishment, striking day care centers may still admit the minimum number of children required by law. The ministry, however, said such a strike is still unlawful.