Seoul to create island of art on Han

Seoul to create island of art on Han 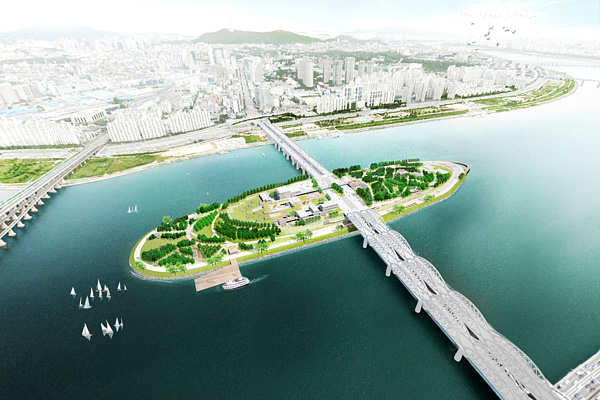 Seoul plans to turn an abandoned island in the middle of the Han River into a music and arts town by 2018, the Seoul Metropolitan Government announced.

“We held three domestic and international contests for nearly two years for anyone and everyone to submit their ideas on how to best use the island,” said Jin Hee-seon, head of the Urban Restoration Headquarters of the Seoul Metropolitan Government. “We hope to transform the island by 2018 into a music-centered cultural complex with indoor and outdoor theaters, parks, farmers markets, cafes and ecology centers.”

The city government announced on Wednesday that the winner of the third contest, Studio MMK, will be the main designer, equipped with 1.9 billion won ($1.39 million) in city funds.

Studio MMK defeated 51 project proposals by 89 other teams from 23 countries in order to win the contest.

Abandoned for over 30 years, Nodeul Island was originally part of the riverbank on the northern side of the Han River in Ichon-dong of Yongsan District, southern Seoul. After the Han River Bridge was built in 1917, more people began to visit the area and its sandy beaches became quite popular in the 1950s and ‘60s.

Then in the 1970s, river expansion and dike-building projects along the Han River led to a massive transformation of the land. The river’s currents shifted, isolating the beach area and turning it into an island.

In 1973, the island was purchased by the construction company Chin Hung.

Then in 2005, the Seoul city government purchased the island with plans to turn it into an art center. The following year, Seoul almost struck a deal with the famous French architect Jean Nouvel, known globally for works such as the Arab World Institute in Paris. But the deal fell through when the architect “asked for too much,” according to the city government.

In 2008, the city government took up another project to transform the island into an opera house, but pulled the plug in 2012 due to a lack of finances.

This time, however, the city government says it is ready to pay for it all.

“We expect to commence construction next year and to finish by 2018,” said Lee Ji-eun, an Urban Restoration Headquarters official at the city government. “The construction will cost 19.5 billion won, while arranging the land, reforestation and other landscape work will cost 24.1 billion won.”

She added, “We have budgeted for all finances.”

Islands in the Han River have been turned into public parks or entertainment centers before, like the Seonyudo Park under the Yanghwa Bridge and the man-made island Some Sevit near the Seogang Bridge.

“The Nodeul Island is different from those,” Lee said, “because it will not only be a park but a creative space that citizens and startup companies can change according to their needs and tastes. You can think of it almost like a university filled with creative minds and entrepreneurs.”

Facilities on the island will be built in a modular building, making it flexible for shopkeepers, entrepreneurs and musicians to add on or take out component parts easily. The island will be divided into two stories, with a 53,000 square-meter (13 acre) top area with open decks and plazas that will be level with the Han River Bridge. There will also be a 59,000 square-meter bottom area that will hold theaters, shops and other arts facilities.