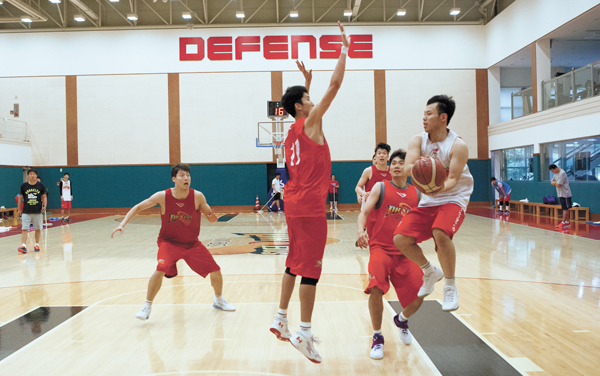 With the Korean Basketball League 2016-17 season on the horizon, the Korea JoongAng Daily visited Ulsan Mobis Phoebus at its training facility in Yongin, Gyeonggi, to observe a practice session and discuss the offseason with coaches and players.

The KBL season starts in October every year and goes through until March of the next year. To endure through a half-year long season, it is pivotal that the players and coaches spend the other six months productively and effectively. For the KBL teams, or any sporting teams for that matter, how they prepare the offseason directly translates into how the next season unravels. Given this fact, fans might wonder what teams do to ready themselves for the new season.

Basketball is a seasonal sport played during winter. Regardless of the significance of the offseason, mid-June, which isn’t quite fully summer, might seem a little premature to begin proper training for the next season. The most that is expected of players is perhaps simple physical therapy and training to loosen up and put their muscles back in shape. Yet, the gymnasium where the Phoebus prepares itself for the new season was filled with the stench of sweat and the sounds of agony, a sign of what practice sessions were like.

Head coach Yoo Jae-hak was absent from afternoon practice of June 17. But this wasn’t enough of an excuse for a lax practice session. As a matter of fact, coach Kim Jae-hoon, a former Phoebus player during his heyday, was determined to make the practice even tougher. “I think the coach is running this session more brutal so that the players would not dawdle or fool around,” said an official from the club’s main sponsor Hyundai Mobis who oversees team-related affairs. Indeed, there is no room for slacking for the six-time KBL champions Phoebus.

Since it was established in 1997, the Phoebus quickly amassed a reputation as a powerhouse and elite club in Korean professional basketball. It all began in the same year as its birth when the newborn team Busan Kia Enterprise, predecessor of current Phoebus, bested the rest of the league to top the regular season as well as the playoff. Since then, the team added five more regular season first-place titles and KBL championship titles, starting with the 2005-6 season.

Behind the curtain of the glory and fame hid excruciatingly painful practice sessions as witnessed on June 17. According to the coaching staff, from June to August, the team goes through three sessions a day: a morning weight training session, afternoon team practice and evening individual practice. “Right now we are trying to get players back in shape and train their skill,” said coach Kim. “The trainings during this period are largely dedicated to developing individual skills of the players.” 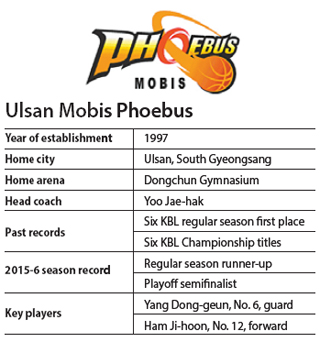 Asked about when the team starts tactical trainings, Kim answered, “We are working on the strategic side of things right now as well. We need to shape up the team, particularly our domestic players, before the foreign players join the team [in August].” But at the moment, the main focus of their practice was defense. Offensive-centered practice would be difficult without the foreigners, who often assume the responsibility of leading scorers of the team, according to a staff.

“[Once the foreign players join the squad], we try to hammer home our style of plays and tactics. We approach this game as a team, rather than one or two individuals dominating on the court,” the coach added. “And that’s the forte of our team, the driver behind our success. Defense and teamwork.”

After a brief running session and defense slides, the team went through half-court 4-on-4 and full-court 5-on-5. As soon as the 5-on-5 ended, the players gathered on the baseline and began their conditioning drills. The first conditioning drill consisted of three players sprinting across the entire court while passing around the ball to lay it in the basket on the other side of the court. Once the players reached the other side, they had to catch the ball before it hit the court and make a return trip. This conditioning session was particularly brutal. If a player dropped the ball or missed the basket, the entire group had to repeat the drill again without a breather.

Even the team’s free-throw sessions were occasionally intense, with a player running the baseline when he missed a shot.

Conditioning drills lasted nearly an hour and half, and the afternoon training session came to its end with what the coaching staff called “30-seconds.” For 30 seconds, players had to sprint to whichever side the trainer pointed, with the direction changing each time the trainer blew his whistle. The two-hour practice had no pause or stops between drills.

Observing the team’s practice session might signal why the Phoebus is deemed championship material each season, even when it lacked a top scorer to speak of. It was clear that everyone’s hard work and dedication, with a dose of tight team chemistry, is what allowed the team to excel.

The team chemistry was also apparent during the practice. About halfway into the practice, a player went down screaming. As soon as he went down on the court, the entire team gathered to check on him.

The KBL season is slated to begin in October this year, with preseason games to be played in September. 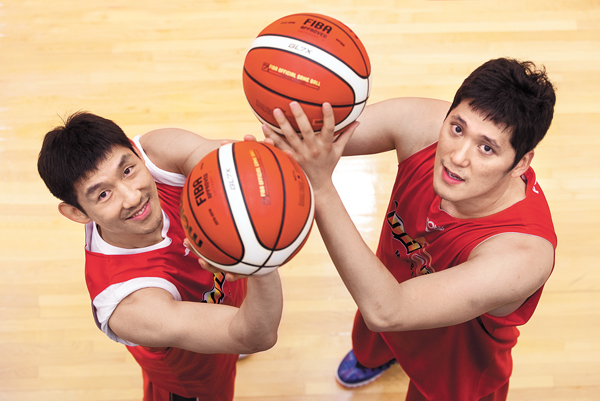 Guard Yang Dong-geun, left, and forward Ham Ji-hoon, right, have played alongside each other for almost a decade as key players for the Ulsan Mobis Phoebus. The duo has helped the team capture four KBL Championship titles. [PARK SANG-MOON]

For the KBL’s Ulsan Mobis Phoebus, teamwork takes precedence over anything else in how they approach their basketball games. To achieve this requires a leadership on and off the court to guide and lead the players.

In the otherwise young squad, the Phoebus turns its eyes to the team’s star players and veterans Yang Dong-geun and Ham Ji-hoon.

It has been 12 years since ace guard Yang joined the Phoebus. After graduating from Hanyang University, Yang first put on the Phoebus uniform in 2004 as the first-round pick of the KBL draft that year. Ham, a forward, joined Yang’s side three years later, when he was picked 10th overall in the 2007 KBL draft out of Chung-Ang University. Since then, the two have been loyal to their Ulsan-based team, devoting the entirety of their career to it. Yang extended his FA contract this month with the Phoebus, signing a three-year contract worth 750 million won ($650,000), making him one of the most expensive players in the KBL today.

Together, the duo has accomplished a feat beyond anyone’s hope, with the team winning three regular season first-place titles and four KBL Championship titles under their watch.

Playing side-by-side for almost a decade now, their tight chemistry and friendship were quite obvious when the Korea JoongAng Daily sat down with the duo on June 17.

“We are trying to get ourselves back in shape right now,” said Yang, the team’s captain, when asked about their current physical condition. “Right now is the most [physically] demanding time of the year. We have to be careful not to injure ourselves at this period.”

Both Yang and Ham, spotted during the practice before the interview, were careful during drills. “I hurt my lower back [a couple of months ago] and took a break from team practice,” said Yang. “I joined the team practice last week so I am not up to where I should be physically. My muscle gets all cramped up and sore and it’s difficult for sure. But this is how it is every year this time around. We need to overcome this to play well [in winter].”

“I have gained some weight so I need to shed few pounds,” said Ham. “I am physically worn out and every part of my body is in pain.”

When inquired about the intensity of the practice session and the conditioning drills, the duo laughed and said, “We normally don’t go that hard. We ran especially hard today.”

“What was the most disappointing about last season is without a doubt not being able to win titles. Regular season titles slipped out of our hands because we were behind in records against the Jeonju KCC Egis. But we achieved a success that no one expected of us so we are glad about that. I think another positive aspect about last season is that young players such as Song Chang-yong were able to acquire more experience throughout the season,” according to Yang.

The 34-year-old Yang picked the playoff games against Goyang Orion Orions as the most memorable moments from last season while the more reserved Ham nodded at his side.

Ham, a 31-year-old forward, however, was certain about his weaknesses. “Shooting,” he said, while Yang jokingly said Ham needs to work more on his stamina.

“For me, it’s about widening my vision,” Yang said. “As a guard, I also need to be able to catch the weakness of the opposing teams. This has been my homework since I was a rookie.”

But Yang, the four-time MVP award winner, was humble throughout the interview. “I haven’t made as much progress as I hoped [in terms of widening vision and catching opponents’ weakness],” added Yang. “I think you are born with such a talent.”

The duo is also optimistic about the team’s future. “Younger players are learning to fill what they lack during games and practices,” said Yang, the team’s captain. “They are learning how to approach this game in pro level. I think this will engender positive impact for our team in the near future.”

Phoebus, well known for its defensive capability yet criticized for lack of offensive prowess, will turn things around this year, according to the players. “In the beginning of each season, our head coach always gives us vision to how the team will go about its business that year. We did fine defensively but when it comes to offense, everyone becomes passive. What the head coach emphasized last year and again this year is to be more aggressive in offense and we plan to execute this.”

Finally, when asked about how Korean basketball can improve, both veterans called for more experience for younger players, especially on the global level. “International experience is vital,” Yang said. “I felt the need when I was playing in the national team. We need experience, not against other Korean players but against teams from other countries.”

“I concur,” added Ham. “We need promising prospects to go overseas and learn advanced tactics and games to develop Korean basketball as whole.”