End of the real estate bubble

End of the real estate bubble 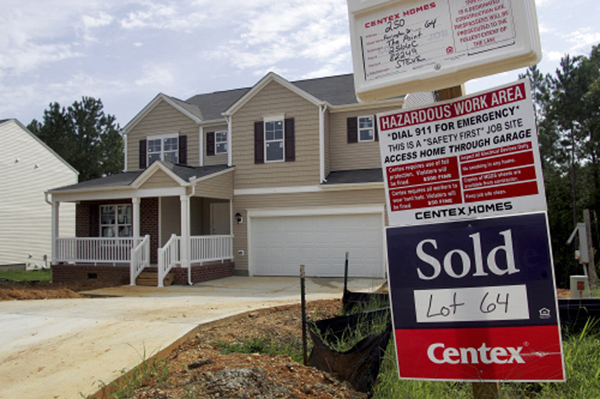 A “sold” sign stands outside a newly completed Centex home at the Pointe in Clayton, North Carolina. The U.S. housing market has begun to move after some stagnation. [BLOOMBERG]

People around the world are once again falling for the myth that real estate is the best investment. They seem to have forgotten that the 2008 global financial crisis was ignited by the burst of the real estate bubble. Central banks are encouraging investors, too. While the banks are pouring money to revive the economy, the funds don’t go to corporate investment but move to real estate instead.

The trend is frustrating but real. When interest rates are very low, people make surprisingly similar economic choices. When there is a possibility of making money, thinking about dignity or morality may be foolish.

The U.S. housing market has begun to move after some stagnation due to signs of the Federal Reserve raising interest rates. Housing prices in the top 20 U.S. cities have increased by 5 percent on average. In April, 620,000 new homes were sold in the United States, the highest in eight years, and prices rose by 9.7 percent from the previous year.

A common characteristic in the global real estate market is extreme polarization. Popular areas are getting more expensive. Properties in these areas provide stable rental income and are favored by the rich. Investors think that even when the economy worsens, there is relatively lower risk of losing rental income or seeing prices decrease.

A similar trend is shown in Korea. The reconstruction zone in posh Gangnam District and some popular areas in the capital region are enjoying a boom. Aside from Jeju Island, real estate markets in other regions are very slow. The trend is aggravating after the Bank of Korea beat market expectations and lowered the interest rate on June 9. New apartment sales in Gangnam are soaring, but compared to prices in Manhattan, Hong Kong and Singapore, some say that housing prices in Seoul are still low.

Governments and central banks in many countries practically condone or encourage overheating of the real estate market. When it slows, there is little hope.

Experts say that the trend will continue for another year or two. The government and investors have no alternatives. When the market is shaken, central banks will release more money to support the market.

But the current situation cannot continue forever. A market not supported by the income of the people and built on debts is like a sand castle. Even in areas where the wealthy live, there are limits to the boom. If the market reaches its peak or an external shock is applied, properties can be put on the market at once.

When the real estate bubble bursts and signs of an economic crisis show, the weakest link will be the first to break. Hyenas will attack the vulnerable first. Korea is a vulnerable area that is likely to become prey. This country is one of the places where people have the tendency to rely on debt rather than their own money.

Korea is the only country where buyers can get loans for intermediate payment for as much as they want regardless of their incomes.

Mass loans for intermediate payment have already exceeded half of the margin of increase for housing mortgage loans.

Meanwhile, the debt-to-income ratio for households has reached the highest level in the world. Builders are pushing out new properties irresponsibly to make money while the market is still hot.

Nevertheless, the government repeatedly says that the market is being examined. It sounds like the current administration is transferring the handling of the aftermath to the next administration. Fancy slogans like creative economy, structural reform and reunification jackpot are disappearing with no outcome, and the real estate market remains noisy. If you can call the real estate boom an accomplishment, it is the biggest one for the Park Geun-hye administration.