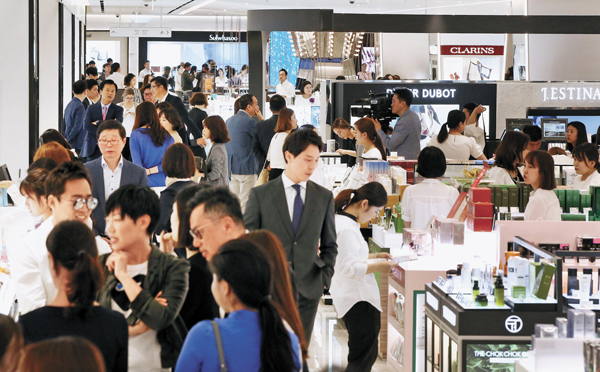 Last Thursday, a cafe near Umeda Station in Osaka, Japan, began filling up with office workers at dinner time. The cafe offered a special Korean fusion menu for the month of June.

The menu was the brainchild of the Japanese branch of the Korea Tourism Organization (KTO). It includes Korean food suited to Japanese tastes, including bulgogi (Korean marinated beef) pizza and kimchi pasta.

Inside the cafe, promotional videos of Korea play, and there are stacks of tourism brochures about Korea written in Japanese. The cafe also plays Korean pop songs.

“Since the Middle East respiratory syndrome [MERS] scare last year, I’ve been reluctant to visit Korea, but having looked at the latest tourist information, I am now considering going on a visit,” said Omuta Chisako, a 48-year old customer.

The number of Japanese coming to Korea last year dwindled to 1.84 million, a decrease of 19.4 percent compared to the previous year. This was largely due to the weak Japanese yen and MERS scare. A longer-term cause of a drop in Japanese tourists since 2013 has been frosty diplomatic relations between Korea and Japan.

The continuous decline in the number of Japanese tourists was reversed in February, when 144,493 Japanese entered Korea. This was a 1.3 percent increase compared to last February.

The upward trend has continued, with March seeing a 2.5 percent rise and April posting an impressive 11.9 percent increase compared to the previous year.

Based on these positive numbers, the KTO predicts that the number of Japanese tourists for the entire year will be back to where it was in 2014, near 2.28 million.

To help this come about, the KTO is working hard to promote Korea in Japan. The organization has formed a partnership with Travel Cafe to operate “Everybody’s Korean Trip Cafe” in the month of June.

Travel Cafe is a Japanese cafe chain promoting tourism, with 25 locations across Japan, including the one in Osaka. The KTO is distributing tourism information on Korea in all the branches.

Certain events at the cafes promote individual regions in Korea. For example, another branch in Osaka is currently holding a promotional week for Daegu. The one near Umeda Station will promote Seoul from Monday to Thursday.

The KTO is also promoting Korea to Japanese on the internet and through social media.

“We launched our promotions for Korea in cafes that are popular among people in their 20s and 30s because we are aware that most Japanese visitors to Korea are free independent travelers,” said Lee Byeong-chan, president of the KTO in Osaka, using industry jargon for tourists who eschew formal tour groups.

“We are going to actively promote Korea because interest among Japanese tourists has grown again.”