Bosch plans to invest big in future of Korean cars

Bosch plans to invest big in future of Korean cars 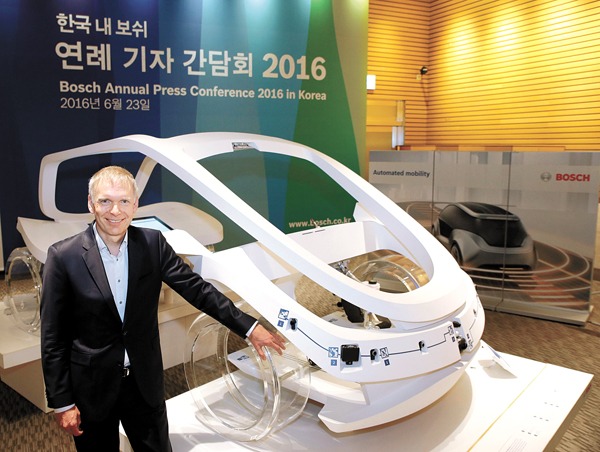 Bosch, the global auto parts and solutions provider, has pledged to invest 130 billion won ($113 million) in Korea’s car market by 2018.

Through a joint venture with the Korean windshield-wiper manufacturer KCW Corporation, called KB Wiper Systems, Bosch Korea said the fund will be used to build a new plant in Daegu to develop wiper systems that will go into production in 2017.

At an annual press conference on Thursday, Bosch Korea emphasized the importance of its Korean clients and outlined solutions that the automotive company has been focusing on to take global car technology to the next level.

“Korea continues to be an important market for Bosch,” said Frank Schaefers, CEO of Bosch Korea, also known by its full name, Robert Bosch Korea. “We see an increasing demand for our diverse range of products and services.”

Bosch Korea also emphasized the importance of autonomous driving technology, which is emerging as a key trend in the global car market.

Bosch Korea said it aims to develop autonomous valet-parking by 2018.

The advanced self-driving technology fueled with internet connectivity will also enable so-called community-based parking, which provides subscribed drivers with the location of parking lots that are often only kilometers away.

“The vehicles themselves act as sensors, so as they drive along the street and register free spaces and transmit the information to our server, enabling a real-time parking map,” Schaefers said.

So-called powertrain electrification, or electric-powered vehicles, is another area in which Bosch Korea hopes to become a leader.

To that end, it is trying to double the energy density of its electric vehicles by the year 2020, which means these vehicles will be able to travel twice the distance on the same charge.

When asked about the recent controversy surrounding devices that manipulate emissions levels in vehicles by Volkswagen, one of Bosch’s clients, Schaefers refused to comment.