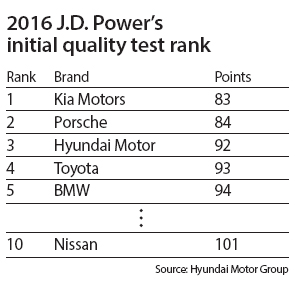 It is the first time in 27 years that a non-premium brand has ranked in the No. 1 spot since the evaluation started in 1987. It was also the first time a Korean car topped the list.

Not only did Kia grab top honors, its sister company, Hyundai Motor, snatched the third spot, moving up a slot from last year.

The annual study, released on Wednesday, examines surveys from more than 80,000 purchasers of 33 auto brands.

This year’s results provide important momentum for Hyundai Motor Group as two of its own brands were ranked in the very top tier, outperforming premium brands like BMW, Mercedes-Benz and Lexus, which are sold at far higher prices and backed by premium value among consumers.

Korean-made cars used to brand themselves with low prices to global consumers and offered nothing more. Next to luxurious and fuel-efficient German cars and durable but also cheap Japanese cars, Korean autos were behind in the global market.

The survey turns the tables, however, rebranding Korean-made cars as quality vehicles.

Kia and Hyundai ranked the 37th and 34th in 2000, when Hyundai Motor Group was founded and participated in the J.D. Power survey for the first time. This year’s score demonstrates how the car company has developed over the years.

In another study that evaluated car quality based on their segment, Hyundai Motor Group also posted positive results.

Hyundai Motor’s Accent and Azera, known in Korea as the Grandeur, captured “Segment Winner” in the small-car and large-car sections, while Kia Motors also grabbed the top two spots with its Soul and Sportage models in the compact-MPV and small-SUV segments.

“The top-notch score is a culmination of what the group has been pursuing since the group was founded in 2000,” a Hyundai Motor Group spokesperson said.

“Improving quality was the sole focus in our effort to raise brand competitiveness in the global market. Korean cars have been underrated, but this result may contribute in turning that thinking around.”