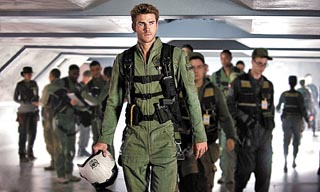 Villainous aliens are once again coming for Earth. Can the planet manage to save itself?

The film takes place 20 years after the first alien invasion that nearly destroyed the earth. Ever since, hieroglyphic-like symbols have been detected by survivors.

The film is the sequel to “Independence Day” (1996), which was released 20 years ago. Director Roland Emmerich decided to revisit the film because radical developments in CGI meant he could finally make the blockbuster sequences he’d long dreamed of.

He is a well-known filmmaker with a penchant for destruction. His other films like “The Day After Tomorrow” (2004) and “2012” (2009) also involved huge disasters and were widely enjoyed by moviegoers.

Much of the original cast reappear in the film: Bill Pullman as Thomas Whitmore, Jeff Goldblum as David Levinson and Brent Spiner as Dr. Okun.

But to add some freshness, the young heroes are played by new faces like Liam Hemsworth as Jake Morrison and Jessie Usher as Dylan Hiller.

The hiatus has only ratcheted up Emmerich’s imagination, leading to a movie sure to impress sci-fi fans.

In this surreal drama, filmmaker Seung-woo goes down to Samnye-eup, located in Wanju County, North Jeolla. He wanders around to find inspiration for his new film. He meets a mysterious girl named Hui-in. As time goes by, Seung-woo begins to have feelings for her. Then he gets a strange burst of inspiration that changes everything.

The film was selected as part of the 2015 Jeonju Cinema Project at the Jeonju International Film Festival. Every year, the festival selects three films to support, which guarantees both their quality and popularity.

Director Lee Hyun-jung stated that she wanted to focus more on the style than the narrative in the film. Considering her previous films like “Virgin Forest” (2012) and “Echo of Dragon” (2013), she has interests in femininity and representations of Korea.

In the film, Hui-in is greatly affected by her grandmother, who tells her various stories about past lives. She is an ordinary girl who dreams of becoming a celebrity, which represents the country as it is today, but also believes in the power of past lives, representing the nation’s past.

The director chose Samnye-eup because it is where the Donghak Peasant Revolution, occurred in 1894. As the first place where Korea’s peasants fought for their rights, it adds another layer of meaning to the film. 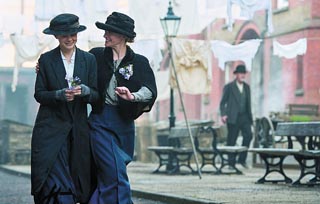 Suffragettes were women who fought for the right to vote in the United Kingdom. This film focuses on the movement around 1912, and is the first to be shot in the Houses of Parliament.

Maud Watts, played by Carey Mulligan, is a normal woman who has never questioned her life as a wife, mother and daughter. But one day, she comes across the suffragettes. At first, she doesn’t think women protesting will change anything. After learning how the rights of women are neglected in society, however, she’s moved to take to the streets and demand women get the right to vote.

The film features historical figures like Emmeline Pankhurst, played by Meryl Streep. She was the main figure behind the Women’s Social and Political Union, the top militant group fighting for women’s suffrage.

Expectations are high for Streep’s performance. The veteran actress’s last political role was Margaret Thatcher (1925?2013) in “The Iron Lady” (2011).

Coming at a time when violence against women seems to be increasing, it’s no coincidence the film was selected to open the 2016 Seoul International Women’s Film Festival.

CIA agent Bill Pope (Ryan Reynolds) is killed while chasing a terrorist organization. He held the only clues to stopping a massive and imminent attack, so the CIA decides to transplant his memories and abilities into death row inmate Jericho Stewart (Kevin Costner), who becomes the one that must stop the plot.

The actors’ experience is evident in the impressive action sequences. Reynolds recently played the lead in the comic-based “Deadpool” (2016), Costner starred in “The Guardian” (2006) and Ethan Renner was in “3 days to Kill” (2014). Gal Gadot, cast as Pope’s wife, also features in some impressive and explosive scenes. The actress is coming off of the action-heavy “Triple 9” (2016) and “Batman v Superman: Dawn of Justice” (2016).

Through the film, director Ariel Vromen takes on the issue of memory transplants, which seems increasingly possible these days. It presents them as something that can save the world or bring catastrophe, but ultimately concludes that if used the right way, the technology can be a source of tremendous good. 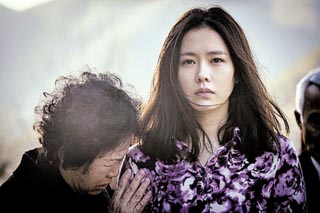 A rookie politician’s daughter disappears in the blink of an eye. Where did she go?

The event takes place on the day Jong-chan, played by Kim Joo-hyuk, started his campaign. In his ambition, Jong-chan is only focused on his career.

Meanwhile, his wife, Yeon-hong, played by Son Ye-jin, is totally panic-stricken. She is busy searching for their daughter, Min-jin. The nonchalant attitude of her husband and the detectives infuriate her.

She begins her own search, but quickly discovers terrifying secrets.

Director Lee Kyoung-mi debuted with the film,“Crush And Blush” (2008), which showcased the cinematic knowhow she picked up while working for director Park Chan-wook during the shooting of “Sympathy For Lady Vengeance” (2005).

The film’s thrilling ambience is due in large part to the impressive sound effects. Lee cranks up the tension in several scenes by introducing mysterious sounds with unknown origins.

Son and Kim previously met as part of the film “My Wife Got Married” (2008), where they also played a married couple. Even though eight years have passed since then, their chemistry still stands out. The veteran actors’ chilling performances are sure to cool down moviegoers during hot summer days. 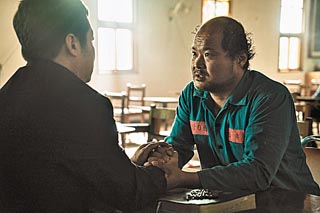 Pil-jae, played by Kim Myeong-min, is a well-known middleman who finds legal cases and passes them on to lawyers.

One day, a letter arrives from a prisoner on death row who insists his own innocence. The prisoner has been accused of murdering the daughter-in-law of a chaebol family.

Pil-jae and his colleague Pan-soo (played by Sung Dong-il) feel that the case is not an ordinary one and could put both of them in jeopardy.

But the seriousness of the case snowballs and as time passes, they cannot ignore the overwhelming pressure from the information in the letter.

Finally, they decide to investigate the case in depth.

Considering only the story line, moviegoers might mistake this film for being very serious. But the witty characters and humorous elements do much to lighten up “Proof of Innocence.”

Veteran actors Kim and Sung are particularly mesmerizing in the portrayal of their partnership on-screen.

Sung is well-known for his humorous characters on various TV dramas such as the “Reply” series. Kim is also acclaimed for his broad acting career.