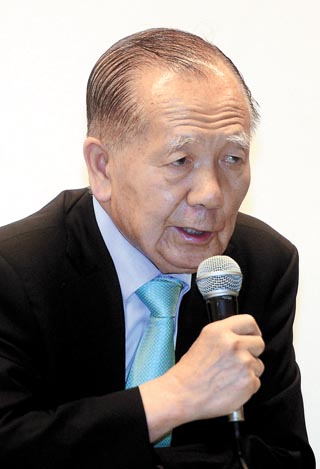 
With less than 100 days until the Busan International Film Festival (BIFF) is scheduled to begin, it remains unclear whether the largest film event in Asia by market size will happen at all because of conflicts between the host city and festival.

Many high-profile figures in the Korean film industry are boycotting BIFF, while many of its top officials including Lee Yong-kwan, the former director of the festival, have been charged with embezzlement by the city of Busan.

Amid the bleak circumstances, Kim Dong-ho, the organizing committee chief for BIFF, and Kang Soo-youn, an executive operating officer, held a press conference Thursday morning to say the festival would proceed as scheduled.

They also promised to reconcile with those who have jumped ship.

“We will hold the film festival as planned,” said Kang, a veteran actress active in the 1980s and ’90s Korean film scene. “Some said we should hold the festival without Korean films [because of the boycott] but BIFF can’t be organized like that.”

Kim founded BIFF and served as an honorary festival director until last year, when he was appointed the first nongovernmental organizing committee chief in May.

Since its inception in 1996, the mayor of Busan has served in that role.

“In order to make those [who are boycotting the film festival] join again, they need an apology from Suh Byung-soo, the former organizing committee chief [and mayor of Busan],” Kim said. “We should also change the governing document to guarantee more independence and freedom.”

The festival has been at odds with Suh and the host city ever since the festival’s former director, Lee, screened the politically charged documentary “The Truth Shall Not Sink with Sewol” in 2014.

Kim frequently stressed the importance of “freedom of speech” and “independence” for a film festival.

“The governing document has to be revised by the end of July at the very least,” Kim said. “Then we can hold the film festival on time.”