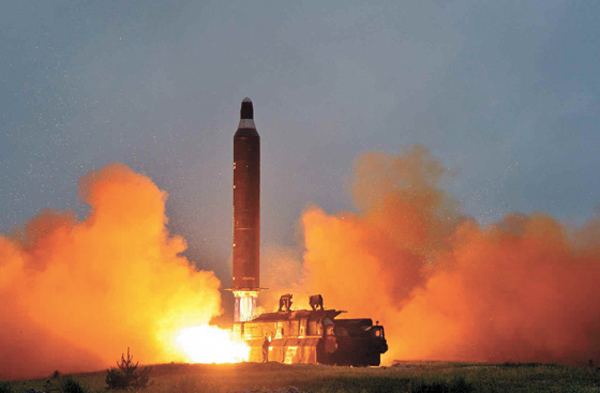 The Rodong Sinmun, the official newspaper of North Korea’s Workers’ Party, published on Thursday photos of a midrange ballistic missile test that state media says propelled one of the weapons more than 1,400 kilometers (870 miles), saying it would allow strikes on U.S. forces throughout the region. [RODONG SINMUN]

North Korea bragged Thursday that a successful intermediate-range Musudan missile test a day before put U.S. military forces in the Pacific within its range.

It also said the missile had reached an altitude of over 1,400 kilometers (870 miles), signifying that it has conquered the technology necessary for a missile re-entering the earth’s atmosphere from space.

“Hwasong” is the Korean name for the planet Mars.

The KCNA quoted Kim as saying his country “now has the realistic capability to strike U.S. forces in the Pacific arena.”

“To defend the nation from consistent threats from hostile forces such as the United States, we must have powerful offensive means to pose a threat to them for our security,” Kim was quoted as saying.

He was also reported as saying he would continue to develop a pre-emptive nuclear capability.

The Rodong Sinmun, North Korea’s main daily newspaper, published photos of Kim at the site of the missile launches, the first such images of the North Korean leader overseeing Musudan launches.

North Korea carried out its fifth and sixth tests of intermediate-range ballistic missiles (IRBM) Wednesday morning, the second of which flew around 400 kilometers in the direction of Japan.

While the second missile fired at 8:05 a.m. Wednesday fell far short of the Musudan’s 4,000-kilometer capability, its 400-kilometer trajectory was seen by military intelligence in Seoul and Washington as having displayed considerable progress in Pyongyang’s IRBM technology.

The missile fired two hours earlier flew around 150 kilometers before it exploded in midair. It is considered a failure and was not mentioned by the KCNA on Thursday.

The KCNA revealed that its sixth Musudan launch reached a height of 1,413.6 kilometers in its 400-kilometer journey across the East Sea. Japan’s Defense Ministry said Wednesday that the missile appeared to have reached an altitude of 1,000 kilometers.

Analysts had speculated Wednesday that Pyongyang chose to give the missile a steep trajectory to avoid trouble with Japan, which has readied its Self-Defense Forces to intercept any ballistic missile from North Korea that enters its airspace.

Experts said if the missile was able to soar as high as 1,000 kilometers, it could have flown approximately 3,000 to 4,000 kilometers had it been placed at a normal angle on the launching pad, the full range of an IRBM.

North Korea also boasted the Hwasong-10 made a successful re-entry into the atmosphere, indicating the missile overcame a soaring temperature of over 7,000 degrees Celsius (12,630 degrees Fahrenheit) caused when an object enters the atmosphere.

If true, it would mean the North has mastered technology enabling it to produce a ballistic missile capable of flying across the Pacific to strike the U.S. mainland. Such missiles have to leave the earth’s atmosphere and re-enter it.

With its claim, the North is expected to test-fire an intercontinental ballistic missile with an aim to unnerve Washington. Analysts say that will be Pyongyang’s attempt to force Washington to negotiate with it.

The South Korean military, however, did not call Pyongyang’s latest Musudan launch a success, though it acknowledged the North has made technical progress.

An official at the Joint Chiefs of Staff said during a regular briefing Thursday that to constitute a success, a missile should fly the minimum range, which is 500 to 600 kilometers for an intermediate-range missile.

The North’s sixth Musudan launch is the first among the six Musudan tests conducted since mid-April that Seoul has not branded a failure. It wasn’t until April 15 this year that Pyongyang started to test its IRBMs since the weapon’s deployment in 2007.

If the North’s claims about the sixth Musudan launch are true, it would pose a threat to the U.S. military base in Guam, where troops that would be sent to the Korean Peninsula if conflict broke out are based, and also possibly a nuclear threat. But suspicions are likely to persist about the North’s IRBM capability, as only one out of the six tests appeared to have worked.

A day after the North’s tests, South Korean President Park Geun-hye called on the military to be ready for any kinds of provocations from across the border.

“In case North Korea provokes, I want you to sternly punish the North to make North Korea realize what a heavy price it will have to pay,” Park told military commanders including Defense Minister Han Min-koo in a meeting at the Blue House Thursday.

The Security Council is expected to adopt a joint statement condemning the North in coming days.

Choe Son-hui, the North Korean nuclear envoy who was in Beijing to attend a forum that involved nuclear envoys from South Korea, the U.S., China, Russia and Japan, told reporters during a press briefing Thursday that she was very “pleased” about her country’s success in the missile test.

“We are greatly pleased as the Hwasong-10 proves our capability of delivering [nuclear warheads],” said Pyongyang’s deputy chief nuclear envoy at the North Korean Embassy in Beijing.

She said the six-party talks suspended since 2009 will be dead forever if they retain their original aim of denuclearizing North Korea.

“The six-party talks were originally meant to address the issue of denuclearization,” Choe said, “But as we now have made nuclear weapons because of U.S. threats and have equipped [ourselves] with delivery means, we have no intention to hold such talks.”