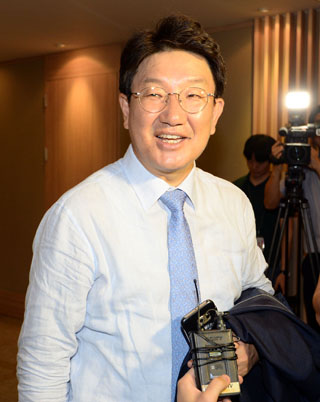 The ruling Saenuri Party’s secretary general resigned Thursday after only three weeks in the aftermath of the latest factional conflict over the homecoming of former party members, including one of the president’s high-profile opponents.

“I have insisted on keeping my job as the secretary general because I was treated as if I am responsible for having made the decision to reinstate the lawmakers,” said Rep. Kweon Seong-dong on Thursday morning at the meeting of the interim leadership.

“But the chairman generally expressed regret over the situation and promised to head the leadership in the right direction, so I will accept this demand.”

The interim leadership of the Saenuri Party, headed by acting Chairman Kim Hee-ok, decided on June 16 to bring back seven lawmakers who left the party after they were denied nominations to run in April general election. The decision was based on a secret ballot in the 11-member interim leadership, which included Kweon and Kim.

Memberships were immediately restored last week for four independent lawmakers who had already filed applications for reinstatement. Among the four was Rep. Yoo Seong-min, who gained considerable public attention after a political battle with President Park Geun-hye.

The decision prompted fierce protests from Park loyalists within the Saenuri Party as well as Kim, who said the decision-making process was “undemocratic” and demonstrated an utter lack of party discipline. They also demanded Kweon’s resignation, criticizing him for having planned the surprise vote to bring back Yoo and others without consulting other lawmakers first.

Kim demanded on Sunday that Kweon surrender his position as secretary general and resign his membership in the interim leadership. Kweon was appointed to the post on June 2. A group of 30 lawmakers loyal to Park also publicly demanded Kweon’s resignation on Monday.

Kweon refused to step down at first, saying Kim has no authority to fire him, before relenting on Thursday.

“The leadership’s decision to reinstate the independent lawmakers was praised by many,” he said. “But the decision was unfortunately tainted because of the controversy surrounding my resignation.”

“I wanted to replace the secretary general because of our differences in opinion,” Kim said Thursday, explaining why he feels Kweon is not a scapegoat. “And I also find this change extremely regretful.”

After the meeting, Kweon said he had resisted Kim’s demand because he thought he was becoming a scapegoat, but changed his mind because Floor Leader Chung Jin-suk proposed a compromise.

Kweon said his honor was restored because Kim said the replacement was not because of the reinstatement decision.

“I also thought the party would gain nothing, while the people would feel tired if the issue dragged on,” he said. “So I decided to step down for the sake of the party.”

A senior Saenuri official also told the JoongAng Ilbo that Kim, Chung and Kweon had also secretly agreed that Rep. Kim Tae-heum, deputy secretary general and a key Park loyalist, would also be replaced. It was an attempt to remove both Park loyalist and Park adversary from the leadership, he said.

Kweon also told the JoongAng Ilbo that he will not submit his resignation letter until all the agreements are met.

It also remains to be seen whether Kweon’s project to produce a white paper analyzing the Saenuri Party’s general election defeat will continue. “I believe [the Park loyalists] cannot stop the white paper just by changing the secretary general,” he said. “If they try, they are digging a grave for the party.”