Early feel for overpass park given at City Hall

Early feel for overpass park given at City Hall 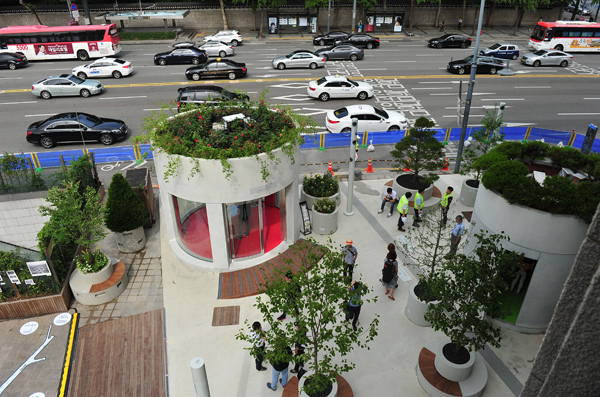 A miniature version of the Seoul Station 7017 Project opened to the public from Thursday allows city residents get a feeling for the park months before its expected completion next April. Situated on the west side of Seoul City Hall, the 18-meter (59-foot) garden can be found behind exit No. 5 of the City Hall Station until the end of November. [SEOUL METROPOLITAN GOVERNMENT]

The Seoul Metropolitan Government opened to the public a miniature version of Seoul Station 7017, the city’s ambitious conversion of an overpass near Seoul Station into an urban park.

The city has built a garden 18 meters (59 feet) long on the west side of Seoul City Hall, behind exit No. 5 of City Hall Station, with three street lamps and 10 tree pots arranged to give visitors an idea of what walking on the overpass will be like. They can also observe a 3-D rendition of the overpass inside a viewing room within the garden, which will be open through November.

Seoul Station 7017 is supposed to open next April.

“I am sure many of you are wondering what the renovated overpass will look like,” said Seoul Mayor Park Won-soon. “The strip of the overpass re-produced here is not only to show you what it will be like, but also to gain feedback from you on how we can build it better.”

Seoul Station 7017 is about converting an overpass built in 1970 into a pedestrian park by 2017, with 17 new pedestrian roads branching out from the overpass to connect different parts of central Seoul.

“The Seoul Station 7017 project can be summarized in one word: connection,” Park said. “The pedestrian overpass will connect all disconnected parts of the central city, especially the eastern and western part of Seoul.”

He added, “As more people walk through these areas, small shops and traditional markets will come alive again, and we’ll soon be seeing some booming economic activities here.”

The 939-meter overpass park will connect different parts of central Seoul, stretching out to Seosomun Park, Jungnim-dong, Manri-dong and Cheongpa-dong to the west, to Seoul Station Plaza in the center, and Namdaemun Market and Hoehyun-dong to the east.

Pedestrians will also be able to walk through some buildings connected to the overpass, including the Daewoo Foundation building to reach Namsan Park, and Hotel Manu to get to Namdaemun Market. The city government finalized agreements with the buildings last year.

During the day, cafes, libraries, flower shops and outdoor stages will be open to the public on the overpass, which will be filled with trees and flowers in 684 pots.

“You’ll be able to walk by garden after garden, and see all the trees from Korea planted here,” said Winy Maas, a Dutch designer in charge of the project.

At night, the overpass will be lit with blue lighting emanating from the tree pots and lamp posts, as can be seen in the miniature version at City Hall.

“At night, you will walk through a flood of blue light,” Maas said, “as if you’re walking in a cosmos, and all the plants will be lit as if they are the stars, which, they are.”

But the project still has a few hurdles to clear.

Ever since Park announced his intention to turn the more than 40-year-old overpass into a pedestrian park in 2014, some shopkeepers in the area complained, fearing gentrification and rises in rents. Others expressed concerns about an increase in traffic.

There is also the vexing question of the vast number of homeless people that hang around Seoul Station.

“We may look into hiring them,” said Ohn Soo-jin, an official of the Green Seoul Bureau of the city government. “Possibly as gardeners, but they can do other jobs, too.”

The overpass will have a 3-meter glass barrier in the section above rail lines to prevent any accidental or deliberate falls, and a 1.4-meter barrier in other areas.