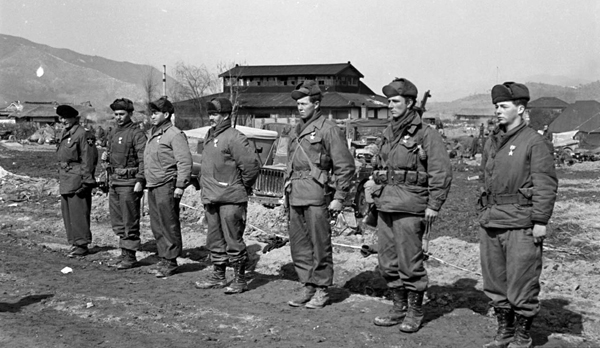 Then-Lt. Col. Ralph Monclar, far left, waits with his French battalion soldiers to be awarded medals in Korea for their contribution to the victory in the Battle of Chipyong-ni, often referred to as the Gettysburg of the Korean War, fought between Feb. 13 and 15 in 1951. Monclar voluntarily reduced his rank from three-star general to lieutenant colonel to join the fight on the peninsula. [KIM SOUNG-SOO]

Kim Soung-soo, a 73-year-old lawyer, made a pilgrimage to Paris last year to honor one of the lesser-known heroes of the 1950-53 Korean War.

The journey brought him to Les Invalides, the grand complex that is the final resting place for France’s most distinguished military heroes, including Napoleon Bonaparte.

In an underground vault, Kim laid flowers at a tombstone with a simple inscription: “Monclar, General, 1964.”

“As I laid down the flowers,” Kim recalled, “I just kept saying to him, ‘Thank you sir for what you have done for my country.’”

Raoul Charles Magrin-Vernerey, who later adopted the name Ralph Monclar, was a French soldier with over 30 years of service in the armed forces. He fought in the Battle of Verdun in 1916 at the tender age of 14 and in Ethiopia in 1941 to fight the Germans. He commanded French Foreign Legion troops in Algeria, Morocco, Madagascar and Indochina.

After retiring as a soldier, Monclar was named governor of Les Invalides. He died in that job in 1964.

But the final battle in his long career as a soldier and officer was, improbably, in Jipyeong-ri, Gyeonggi, 70 kilometers (40 miles) east of Seoul. The year was 1951. Monclar was 59.

“Standing before the vault with his name engraved, I felt like I was finally paying a debt owed by all Koreans after more than 60 years,” the former judge told the Korea JoongAng Daily in his law office in Seoul during an interview Tuesday.

Kim’s visit to Les Invalides along with the late general’s daughter Fabienne Monclar and son-in-law Bernard Dufour, a retired French colonel, was the culmination of a decade-long attempt to understand the French general’s dedication to fighting in the Korean War.

“He didn’t have to risk his life in Korea,” Kim said, “and he could have easily let others do the job.”

Monclar was a three-star-general when France decided to send a battalion of 800 men to South Korea as part of the United Nations allied forces. His rank was too high to lead a battalion unit as it would cause a disruption in the chain of command. 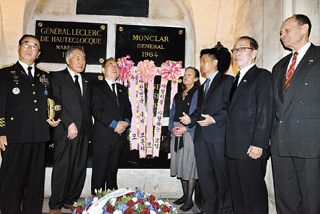 Kim Soung-soo, third from left, and Fabienne Monclar, daughter of General Monclar, fourth from right, stand in front of the tombstone for Monclar, who died in 1964, on June 10 last year at Les Invalides, the final resting place for France’s most distinguished military heroes, in Paris. [KIM SOUNG-SOO]

The veteran soldier then made a choice that dumbfounded many: He voluntarily reduced his rank to lieutenant colonel so he could be sent to Korea.

David Halberstam, the late journalist and author, wrote in his acclaimed 2007 book “The Coldest Winter,” which chronicles the three-year conflict: “His superiors in Paris thought he was too old for the Korean assignment, but he felt a man was never too old to command in a cause in which he believed, and with that he won his argument. He led with zest and exuberance.”

On Nov. 30, 1950, the self-demoted Monclar arrived in Busan, leading the French battalion of more than 800 personnel. A total of 3,421 French soldiers would fight during the three-year war. Of them, 287 were killed and 1,350 were wounded in action.

To South Koreans, tomorrow’s date - June 25 - invariably strikes a chord as it marked the beginning of the war that killed thousands and left the peninsula and many families divided. The dates Feb.13-15, 1951, hardly register.

But it was during that three-day period that the United Nations Command forces led by the U.S. military successfully held their defense line against swarms of Chinese soldiers who had joined the conflict in November 1950 to save their beleaguered communist ally, North Korea.

The three-day battle, known as the Battle of Chipyong-ni (the former transliteration of Jipyeong-ri), is called the Gettysburg of the Korean War. It turned the tide of the war in favor of the multinational forces. The allied forces gave the Chinese their first defeat despite the fact that they were outnumbered by almost 10 to one.

The allied forces consisted of 5,600 men from the U.S. 23rd Infantry Regiment, which included South Korean soldiers and the 800-strong French battalion commanded by Monclar. They held off an estimated 50,000 Chinese soldiers. Records show the Chinese suffered nearly 5,000 men killed in action at Jipyeong-ri, while the Americans and French lost 52 men and had 42 men go missing.

The Battle of Chipyong-ni is considered a key moment in the conflict. The UN forces were growing increasingly worried about the military capabilities of the Chinese, which had pushed allied forces below the 38th parallel all the way from the border area with China. They had seized Seoul. Had the allied forces been defeated and let the Chinese move south of Jipyeong-ri, it was possible that the UN Command would have considered a military withdrawal from the peninsula, giving up on South Korea.

The Chinese withdrawal from Jipyeong-ri on Feb. 15, 1951, was their first defeat since entering the war four months earlier. With momentum from the victory, allied forces recaptured Seoul by mid-March and made steady northward advancement.

Judge-turned-lawyer Kim said that many of the French soldiers commanded by Monclar in Korea were subsequently dispatched to fight in the Indochina War, which ended in 1954 with France’s crushing defeat by the Viet Minh’s military forces.

“I believe most of the French soldiers who were shipped to Vietnam after their mission here were killed there,” Kim said. 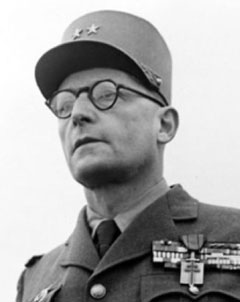 Kim told the Korea JoongAng Daily that like most Koreans, he had not known about the Battle of Chipyong-ni until about 10 yeas ago.

“I had an office in the Jipyeong-ri area and so I had to visit there often,” he said. “I would often hear from locals that there was a battle there during the Korean War. They, too, didn’t know much about it. They told me they used to trade empty shells found in the fields for sweets when they were young.”

Intrigued by the accounts, Kim began researching the little-known yet pivotal battle.

“As I began to discover more and more about the French general, I grew more thankful for what he had done for the country,” he said.

The lawyer likened Monclar to Adm. Yi Sun-shin because both volunteered to reduce their ranks to fight.

“Admiral Yi decided to lead his fleet as an enlisted solider after he was wrongfully prosecuted on charges that he had disobeyed the king,” Kim said. “In the same way, Monclar volunteered to take a demotion despite worries that he was too old to fight.”

Kim started the Foundation for the Remembrance of the Chipyong-ni Battle in 2009 and invited Monclar’s daughter Fabienne and son-in-law Bernard Dufour to Korea in 2010.

Kim said Monclar may have accepted the demotion because he felt responsible to bring back all the French soldiers he could.

“He recruited young men by touring the country to form a battalion to fight in the Korean War,” he said. “He must have felt that it was his duty to look after some 600 men whom he had chosen to go overseas.”

One anecdote in the “The Coldest Winter” illustrates Monclar’s bravado as a military man. One early morning during the Chipyong-ni battle, Monclar had his soldiers light little fires to keep warm.

Worried that it would expose their positions, Col. Paul L. Freeman, commander of the U.S. 23rd Infantry Regiment, told him to extinguish the fires.

Monclar consented, but only after telling Freeman, “If they know where we are, they will attack us. Then we will kill them.”