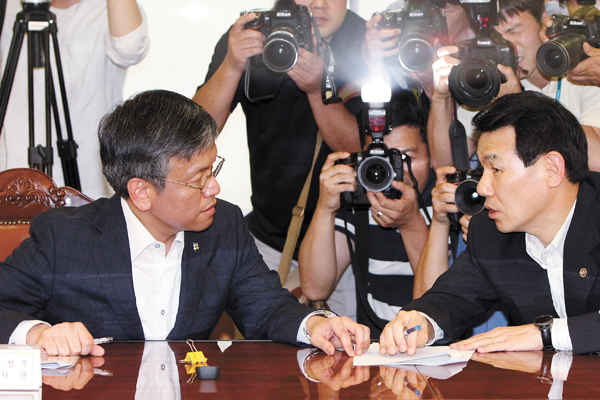 Vice Finance Minister Choi Sang-mok, left, speaks with Jeong Eun-bo, vice chairman of the Financial Services Commission, at a meeting to discuss measures against the so-called Brexit at the Korea Federation of Banks in central Seoul on Friday. Choi also met with officials from the Financial Supervisory Service and Bank of Korea. [CHO MUN-GYU]

Government officials and industry insiders had mixed views on the United Kingdom’s decision to leave the European Union on Friday, but a majority of them surveyed said the impact on Korea will be limited since the two countries’ trading volume is not significant.

However, some warned that things will worsen if other European countries decide to follow Britain’s path.

Choi Sang-mok, vice minister in the Ministry of Strategy and Finance, said the direct impact of the vote on Korea will be limited, as the two countries’ trading volume is relatively low, at an emergency meeting with representatives from the Financial Services Commission, Financial Supervisory Service and the Bank of Korea on Friday morning.

“Many research institutions including the International Monetary Fund [IMF] believe that Britain leaving the EU will have limited effects on non-European countries, but it is true that the decision might weaken the investor sentiment in general globally,” an official from the ministry said.

In fact, the IMF projected that the so-called Brexit will have an effect of lowering the GDP growth rate for non-European countries by only 0.2 percent in 2018.

“It will take at least two years for the U.K. to completely pull out of the EU, and we believe it won’t have an immediate impact on our exports and investment,” Hwang Soo-sung, a director at the Ministry of Trade, Industry and Energy, said Friday.

However, a number of experts and industry insiders expressed concerns that the U.K. decision might drag down the European economy, which will hurt Korea’s exports to the European Union.

“Brexit could have a domino effect of other countries in Europe such as Sweden and Scotland deciding to take the same path,” said Choi Kwang-hyeok, an economist at eBest Investment & Securities.

“Uncertainties in Europe will continue to grow if such a case happens, and this might have negative impacts on the Korean market and companies doing business later on.”

Exporters expressed concerns over Friday’s poll result and said they are worrying about a fall in sales in Europe as a whole.

“Exports to the EU have improved in recent years, and there are worries that it might decline once again after Britain’s decision on Friday,” a Hyundai Motor spokesman said. “We will have to look further into this issue to handle this matter.”

In fact, Hyundai Motor and Kia Motors currently operate manufacturing plants in the Czech Republic and Slovakia, and they were exempt from paying on export vehicles to the U.K. However, they will have to pay 10 percent tariffs when Britain leaves the union.

Hyundai and Kia sold some 78,000 vehicles in Britain this year up to May.

“We believe the cargo volume will decline, and we are trying to come up with some specific plans to deal with this,” an industry insider said.

Some argue that Britain’s decision might actually help Korean export companies such as Hyundai Motor that compete with Japanese companies since the yen will likely continue to soar.

The Japanese yen soared past 100 to the dollar, as demand for safe havens rose after the news on the U.K. poll result.