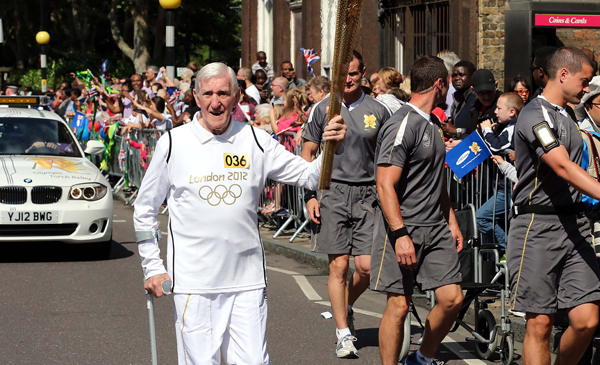 Hastings is a small harbor town with a population of 80,000 on the southern coast of England. On July 17, 2012, the city was more vibrant than anywhere in the world.

Ten days before the opening of the London Olympics, the torch relay passed through the area. The organizing committee selected 17 runners to relay the torch through Hastings, including a 14-year-old girl and a 70-year-old man.

I was one of the lucky ones there as I was covering the International Olympic Committee. The London Organizing Committee had one criterion for selection: ordinary people.

On the day of the relay, I met with other runners at the local city hall. They were ordinary people, including a student, an aerobics dance instructor and a veteran.

But their stories were far from ordinary.

Martyn Compton suffered serious injuries in Afghanistan and was in a coma for three months. Although he recovered, he at one point thought he would rather die when he found out he had burn scars covering his body.

But with his family’s support, he became a volunteer worker for war veterans. Holding his 9-month-old son in his arms, he said he was happy to be alive.

Sara Hatton was an aerobics dance instructor and colon cancer survivor. Lana-Emily Foyle, who is 14 years old, had a major heart surgery but aspires to be a track-and-field athlete.

Oona Muirhead, who was in charge of the torch relay for the London Olympics, said the relay was a festival celebrating the greatness of ordinary people.

The notice for torch relay ideas released by the PyeongChang Organizing Committee on Monday reminded me of that day in Hastings when 8,000 runners delivered the torch 80,000 miles across England. The London Organizing Committee was praised for creating the best relay program ever. Each runner contributed to making some of the profits by selling torch replicas for 199 pounds ($270).

Despite various problems associated with the operation of the Games themselves, the 2016 Rio Olympics opening on Aug. 6 has started to attract attention with its torch relay. There are many extraordinary stories of ordinary people, from a 106-year-old lady to a man who proposed to his girlfriend after passing over the flame.

What stories will Pyeongchang show, as it has been five years since it was selected to host the Winter Olympics? With the Korean Peninsula full of discord between the rich and the poor, men and women, and the South and the North, the Olympic torch may be able to reignite the flames of unity.


*The author is a political and international news writer for the JoongAng Ilbo.