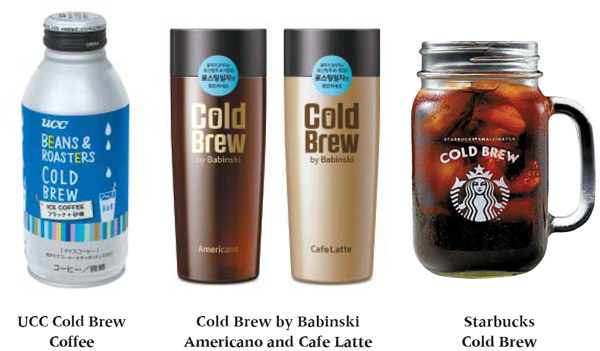 All it takes is to ask, “Do you have it?” and the vendor magically gives you the “it” item among some 20 other options from the refrigerator. It is such a popular drink that you don’t even have to say the full name.

The item is Korea Yakult’s Cold Brew by Babinski, a coffee beverage that has been slowly brewed with cold water. The drink used to be widely known in Korea as Dutch coffee.

The lengthy brewing process is said to imbue the coffee with a richer and more flavorful aroma, but the drink occupied a niche market until recently, even in Korea’s saturated coffee business, as consumers tended to stick with familiar brews like Americano and latte.

But Korea Yakult’s newest item is turning the tide.

With a reasonable price tag of 1,500-2,000 won ($1.7) per bottle and a unique distribution channel, this bottled coffee has stirred new hype in Korea for cold brewed coffee. Yakult sells it only through its “Yakult ladies,” a door-to-door network of women pushing motorized carts for home delivery of Yakult’s mostly yoghurt products. Korea Yakult said more than 95 percent of its sales of Cold Brew are through that channel.

The company has now added a latte and a super-strong version that drinkers can mix with cold water to dilute to their precise desired strength.

A Yakult spokesman said consumers are reacting to a lower price for a drink with a quality that matches that of coffeehouse brews. “The coffee market hasn’t grown significantly in recent years, but we believe this item will revitalize the market and turn cold-brewed coffee, which was a small player, into a more widely consumed one.”

In the 100 days since its launch in March, Yakult has sold 7 million bottles, generating 14 billion won in sales.

Eyeing Yakult’s success, coffee franchises are sprinting to roll out their own versions of cold-brewed coffee.

In April, Starbucks Korea began test-marketing the beverage in 100 of its outlets; after good consumer reaction, it expanded its network in June to include 800 shops around the country.

Twosome Place, another major coffee franchise run by CJ Foodville, also widened its distribution after a test in its Samseong-dong shop in southern Seoul to all its outlets nationwide. Hollys Coffee and Caffe Bene also added the item to their menus.

“Up to this point, Korean consumers have been used to drinking iced Americano which has a more bitter and dense flavor,” a Starbucks Korea spokesman said. “But with the summer coming up, we’ve noticed that people want to drink coffee that is lighter in caffeine but has a distinctive aroma. After noticing that there is demand for cold-brewed coffee, we’ve decided to expand the menu in all our branches.”

Convenience stores have also jumped on the bandwagon, putting similar products on their shelves. GS25 and CU are among chains that have come up with their own products, such as UCC Cold Brew Coffee at 2,900 won and GET Dutch Coffee Water at 2,000 won per bottle.

“Dutch coffee wasn’t a general drink in the past, but with the recent boom, we decided to exclusively sell the Japanese brand UCC’s cold-brew coffee. It has been only a week or two since the launch, but it has been selling steadily,” said a spokesman for GS Retail, the operator of GS25.