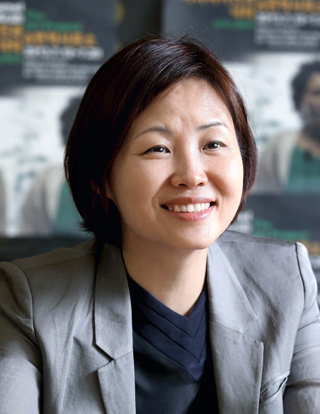 The life of Korean women in the 21st century is no doubt fairer and freer than in the past, but the comparative empowerment has subjected today’s women to a new societal pressure, the so-called superwoman syndrome, whereby women are expected to exceed both at their career and their domestic chores.

Shim Hye-jeong, a movie director, wife and mother, was criticized by her family for making films that speak for women with superwoman syndrome, as they felt Shim should have stayed home with her kids.

In 2005, Shim joined the painting department of a local art university. Despite disapproval from her family, she went on to graduate school and developed an expertise in experimental and short films.

All of Shim’s films are based on her own life. “The Arabian and the Camel,” an autobiographical documentary she directed in 2013, features her father; her mother, who collapsed from a stroke 11 years ago; the family’s Korean-Chinese caregiver; and Shim herself.

The documentary depicts the odd dynamic between parents who are helpless without their caregiver - who is in charge of all the domestic work - and the daughter, who feels isolated in her own home.

“As the Korean-Chinese caregiver becomes the principal agent of domestic chores, it creates an odd tension between her and the daughter, as the hostess of the house changes from daughter to caregiver,” Shim said. “The perspective of the documentary is distinctive from others that depict migrant workers as victims and socially vulnerable groups.”

The movie was a big achievement for a woman of Shim’s age and an important message for young Korean working moms who often hire Korean-Chinese workers to help them balance their housework and their careers. Many such women applauded the film for voicing concerns that they dared not express.

Shim also put a substantial amount of effort into helping other female directors continue their work.

Like many other women, Shim felt guilty for working while her children remained at home. This was exacerbated by the criticism she faced from her family. It was especially difficult for her to fight against the prejudice that perceives the artistic work of housewives as a hobby and not a career.

Shim believes the only way female directors can continue their careers is by cooperating with each other.

“It’s difficult for married female directors to consistently produce movies because they lack the time, money and physical strength to do it,” Shim said. “Finding a distribution company willing to release the movie is way more difficult, so I thought that we had to come together.”

Along with other female directors she met at the university, Shim arranged a space at the top level of a building in Insa-dong, Jongno District, central Seoul, where they screened their short films and experimental videos for about four years.

She and her peers also starred in each other’s films in order to reduce labor costs. Shim played the main character in her colleague Kim Do-young’s movie, and in return, Kim appeared in Shim’s movie.

“In last year’s Seoul Independent Film Festival, for the first time the movies by female directors comprised more than half of all the movies,” Shim said. “But it’s still difficult for female directors to receive investment and find distributors. I want to continue helping other women so that they can continue making art.

“I believe that art can propel changes in a person and in the world. My dream is to create a piece that can shock the world and shake off norms that are entrenched in society, norms that people take for granted.”