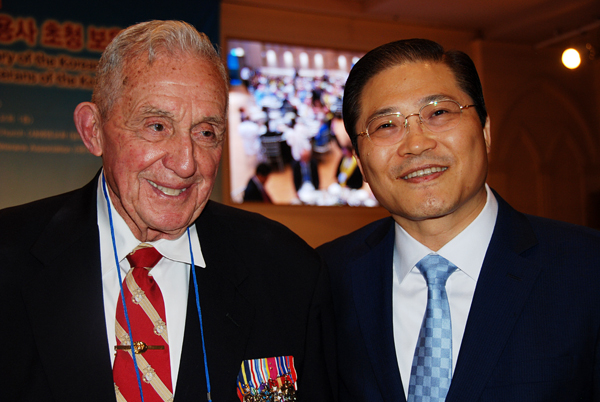 Richard Carey, left, a retired lieutenant general of the U.S. Marines, and pastor So Kang-suk, right, at the worship session held Sunday at the Sae Eden Church in Yongin, Gyeonggi, to honor U.S. veterans of the 1950-53 Korean War. [BAIK SUNG-HO]

Deep bows of respect are rarely given to strangers in Confucian societies, but in Los Angeles in 2006, a Korean pastor bent his knee and bowed deeply to an elderly African-American man whom he had never met before.

So Kang-suk, a senior pastor from the Sae Eden Church in Yongin, Gyeonggi, was invited to the 2006 Martin Luther King Day Parade in Los Angeles. On the eve of the parade, the African-American gentleman approached him and asked him whether he was from Korea.

When So responded that he was, the foreigner began to list cities in Gyeonggi - “Dongducheon, Uijeongbu, Suwon, Pyeongtaek” - and then showed So a scar along his waist. He said he got it during combat in Suwon.

The old man, Nathaniel James Riddick, is a former Marine master sergeant who had fought in the Korean War (1950-53).

“I want to go back to Korea, but it makes me sad that I can’t due to my financial situation,” Riddick said.

Hearing this, So bent down and gave the veteran a deep bow. Watching So bow, Riddick began to sing “Arirang,” Korea’s most famous folk song.

In June 2007, the Sae Eden Church invited some 50 former United Nations peacekeepers who had participated in the Korean War to revisit the peninsula.

Since then, about 2,000 war veterans and their families have come to Korea. The church paid their travel costs, including airfare and accommodation.

The 74 people stayed in Korea for five days from Sunday to Thursday.

Richard Carey, 88, a retired lieutenant general of the U.S. Marines who is known for his heroism at the Battle of Changjin Reservoir, also commonly known as Chosin Reservoir, was also invited this year.

“I was a commander during the battle,” Carey said during a worship session held Sunday at the Sae Eden Church to thank the war veterans. “The Chinese Air Force had passed our defense lines and were farther south than where we were. We were left behind enemy lines. I successfully escaped by throwing grenades while leading another unit, whose commander had died, as well as mine.

I can’t believe the Korea that I risked my life to protect has developed so much.”

He added, “I can’t forget the moment we evacuated from a dock in Hungnam [a city in North Korea]. I still remember the desperate look in the eyes of the refugees. The U.S. troops abandoned their weapons to board some 100,000 civilians on a ship. I was also on the ship.”

“There were a lot of times when my heart ached while I hosted the event for the last 10 years,” pastor So said.

During their visit, the veterans and their family members enjoyed a lunch buffet on a Han River cruise and a visit to the N Seoul Tower.

When they visited the War Memorial of Korea in Yongsan District, central Seoul, on Wednesday, one veteran cried aloud in front of the list of names of those who were killed in the Korean War.

The veteran said he had persuaded his friend to join the military with him and go to Korea because he didn’t want to be alone in a foreign country, but his friend died in the war while he survived.

“You died because of me,” the veteran said with tears flowing from his eyes and one of his hands placed on the name of his friend.

Recalling this, So said, “The people watching this also cried.”

He added that many of the veterans are in their 80s and that the long flight overseas is therefore difficult for many of them.

“Starting from next year,” he said, “some of our staff members will go to the United States to escort them.”