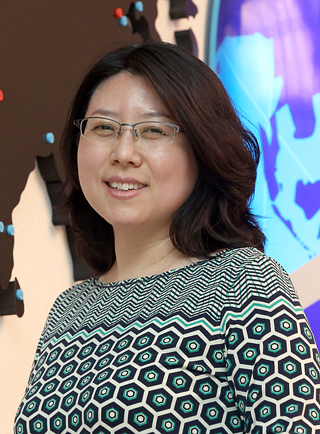 The Korea Trade-Investment Promotion Agency (Kotra) appointed Lee Young-hee, deputy head of the Middle East, Africa and CIS team, as head of the Muscat office in Oman at the end of last month, effective Aug. 1.

The 40-year-old has become the first female chief of any foreign office in the Middle East across all government agencies including the Ministry of Trade, Industry and Energy and the Ministry of Foreign Affairs.

“I will try to combine and develop Oman’s economic development plans with Korea’s competitive edge in construction and IT to help Korean companies aspiring to enter Oman,” Lee said in an interview on June 20 at the Kotra headquarters in southern Seoul.

“Even though Oman has placed fewer infrastructure project orders in the aftermath of the reduced international oil prices since 2014, the country still offers a lot of opportunity for Korean companies.”

LG Chem recently announced it would be an exclusive supplier of over 200,000 reverse osmosis filters for water processing to a seawater desalination plant to be constructed in Sohar, Oman.

Industry insiders estimate the initial batch of orders will amount to 10 billion won ($8.5 million). If future demand for the replacement of existing parts is taken into account, the tally could grow to as much as tens of billions of won.

Muscat in February opened a national digital forensic laboratory, modeled after the cyberspace crime countermeasure system set up by Korea. DuzonBizon, a Korean corporate software developer and distributor, has been managing the lab on 11.2 billion won received from the Oman government’s Information Technology Agency.

Lee said the ninth economic development plan unveiled by the Oman government earlier this year shows that the Middle Eastern country plans to boost investment in eco-friendly industries as well as in tourism and IT - on top of existing construction and plant projects.

After studying Arabic at Hankuk University of Foreign Studies, she earned a master’s degree in simultaneous interpretation, and after a year at the Saudi Arabian Embassy in Seoul as a translator, she went on to the Kotra in 2004. She spent two years at the School of Advanced International Studies at Johns Hopkins University until 2014 studying Middle Eastern studies.