Many would alter Constitution - if they could

Many would alter Constitution - if they could 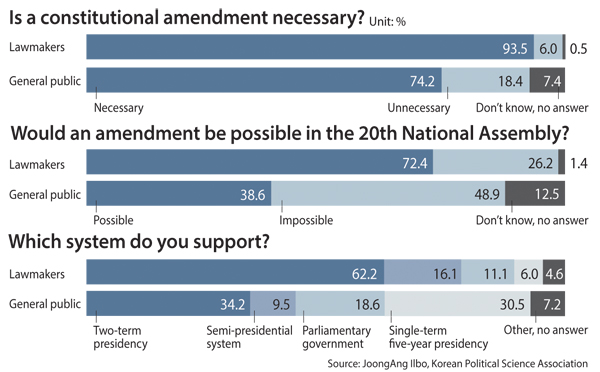 More than two-thirds of lawmakers in the newly launched 20th National Assembly are in favor of constitutional reform that would end Korea’s five-year, single-term presidency and introduce a new governing system, according to a joint survey by the JoongAng Ilbo and the Korean Political Science Association.

The outcome indicates that an amendment is technically possible in the current National Assembly because a two-thirds vote is required by the legislature. But not all the lawmakers supporting an amendment agree on how to change the constitution.

Of the 217 representatives in the 300-seat legislature who participated in the poll, 203 (93.5 percent) said a constitutional amendment was necessary, while only 13 (6 percent) said it was not. The rest gave no answer.

When asked what governing system they were most fond of, more than half (135 respondents, 62.2 percent) answered a double-term presidency.

The survey was held from April 19 to Wednesday.

While such an amendment topic has been discussed in political circles for years, the issue has gained traction after National Assembly Speaker Chung Sye-kyun said in his inaugural speech on June 13 that the time has come for Korea to introduce a new governing system.

He insisted that the change take place during the current assembly’s tenure, which lasts until 2020.

Next year will mark the 30th anniversary of the current Constitution, which ended decades of dictatorships and introduced direct presidential elections.

President Park Geun-hye, whose term ends in 2018, insisted in January that now was not the time to consider a constitutional amendment and that doing so would be like being “sucked into a black hole.”

Of the 92 Saenuri Party lawmakers who participated in the poll, 84 (91.3 percent) said they agreed with a constitutional amendment. So did 81 (95.2 percent) out of 85 Minjoo Party lawmakers, 32 (96.9 percent) of 33 People’s Party members, and three out of four from the Justice Party.

Although nearly all of the respondents said they preferred a change in the system, a relatively distinctive portion - 57 (26.2 percent) - said the actual prospects of doing so in the 20th National Assembly were low.

Among the various types of governing systems that could replace the current five-year, single-term presidency, most respondents (135, or 62.2 percent) said a double-term presidency was most appropriate.

A semi-presidential system, in which diplomacy and military affairs are handled by the president while internal affairs are in the hands of the prime minister, gained the second -most votes with 35 lawmakers, or 16.1 percent. In this case, the president would be elected by voters, whereas the prime minister would be elected by the National Assembly.

The third-most popular system was a parliamentary government in which the executive power is vested in the majority party of the legislature, with 24 lawmakers, or 11.1 percent, showing a preference for it.

Of the rest, 13 lawmakers (6 percent) said Korea should stick with the current system, while 10 (4.6 percent) did not answer or mentioned other options.

In a separate survey asking the general public the same questions, 742 of 1,000 adults randomly surveyed across the country said amending the constitution was necessary, which turned out to be, at 74 percent, lower than the corresponding percentage (93.5 percent) among lawmakers.

Of the given alternatives, a double-term presidency was chosen by the highest number of respondents, 34.2 percent.

The second-most popular governing system was the current single-term, five-year presidency, chosen by 30.5 percent, while third place went to a parliamentary government (18.6 percent.)

The semi-presidential system, which was the second-most popular alternative among lawmakers, turned out to be the least popular among the Korean public, chosen by only 9.5 percent.

The second survey was held from May 3 to 5 by telephone.

When asked whether the 20th National Assembly could actually pass a constitutional amendment during its term, nearly half (48.9 percent) answered “no,” while 38.6 percent said “yes.” The remainder did not answer.

“People know by experience that amending the Constitution is not easy work,” said Jang Seung-jin, a political science and international relations professor at Kookmin University in Seongbuk District, northeastern Seoul.

“Lawmakers, for their own needs, want an amendment, whereas the public is really skeptical about the idea because they’re thinking realistically.”

Ka Sang-joon, a professor of political science and international relations at Dankook University in Yongin, Gyeonggi, said Korean policy makers seem eager to ditch the current system because they think the president’s “imperial authority” should be reduced.

“Four years ago, when the 19th National Assembly opened its doors, there were many lawmakers who wanted to amend the Constitution,” he said. “But nothing much changed because they had different opinions on what the alternative would be.”