Paying the price for peace

Paying the price for peace 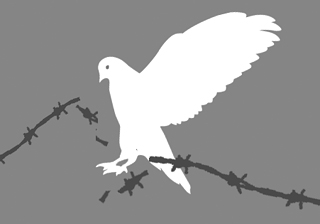 While lightening never strikes the same place twice, the Korean people suffered two catastrophes in the same century. The first was the annexation by Japan in 1910 and the second was the Korean War in 1950 that left the country in ruin and resulted in millions of casualties and tens of millions displaced.

While we pledged never to have another war, time has passed and we are once again at the crossroad of war and peace. In the early summer of 1953, as the war was nearing its end, I had participated in a protest rally opposing a truce. After the devastating war ripped the country apart over three years, I had become repulsed by the idea of ending the war with no winner and two losers. But the truce system remained in Korea for 63 years now, war clouds still hang over the Korean Peninsula.

We don’t even need to point out that the historical legacy and the sensitive geopolitical location of the Korean Peninsula are the causes of misfortune. However, we must remember that the international relations of the powerful neighbors determined the possibility of war and peace in the Korean Peninsula through imperialism, the Cold War and the rivalry between the United States and China. Therefore, it is not easy for the United States and China to change their Korean Peninsula policy at once, considering 37,000 American soldiers killed in the Korean War and literally “countless” Chinese casualties.

From the independence movement, Koreans were divided into two factions over the model of the new country upon liberation. When the power dynamics of neighboring giants and ideological discords got tangled, the peninsula was divided into the South and the North in 1948. It is another tragic chapter in Korean history.

But the crisis that the Korean Peninsula is faced with today is serious because the curse of the nuclear era that began with the atomic bomb dropped in Hiroshima in 1945 is directly related to the survival of the Korean people, as North Korea continues to fight to become a nuclear power. The choice of Pyongyang is likely to drive the peninsula and all of east Asia into a completely nuclear armed region.

Establishing an East Asia Peace System aimed at preventing the unprecedented tragedy of the Korean people and the rest of Asia from falling into the pit of mutual destruction is only possible when the highly advanced diplomacy of the three-dimensional peace structure that links the interests of the United States, China, Russia and Japan, inter-Korean confrontation, and national determination of the Koreans is successful. Let’s hope that Korea’s creative diplomacy can rise up to the historic challenge.

Until now, Korea has consistently pursuing the policy based on Korean people’s universal idea that keeping peace is the priority while harboring the dream for reunification. As Korea successfully installed democracy, the National Community Unification Formula finalized by the Korean citizens and four political parties in 1989 clearly stipulated such positions. We accepted the reality that two different systems exist on either side of the Demarcation Line and pledged to ultimately attain peaceful reunification by consistent exchange and cooperation, allowing the recovery of a single national community.

In 1991, a year after Germany’s reunification, South and North Korea made positive progress by signing the Inter-Korean Basic Agreement and the Joint Declaration of the Denuclearization of the Korean Peninsula and joining the United Nations together. In retrospect, the epoch-making progress in the inter-Korean relations at the pivotal historic point was made along with the globalization trend of the world. The only way to get through the current crisis is to go back to the mutual awareness that made such progress possible. In order to attain our dream together with the North, now is the time to get ready to pay the price for peaceful reunification, not a war.

In other words, we need to pluck up the courage to admit that preparation for peace could accompany a more challenging and higher price than going to war.

If blind sacrifice for a war follows a march of death, prioritizing efforts for peace is contributing to the continuation of the community and foundation for human liberty. That’s the motivation to fundamentally prevent the nightmare of a war and curse of nuclear warfare by reminding us of the cherished dream of a national community we promised a quarter century ago. For the 66th anniversary of the Korean War, we have to prove to our neighbors, the world, our ancestors and descendants that Korea is not foolishly jumping into the road of mutual destruction but has the wisdom to pay the price for peaceful coexistence and reunification. As we are democratic citizens willing to fight for freedom, we will also pay the price for peace.