Who wins from Brexit? China

Who wins from Brexit? China 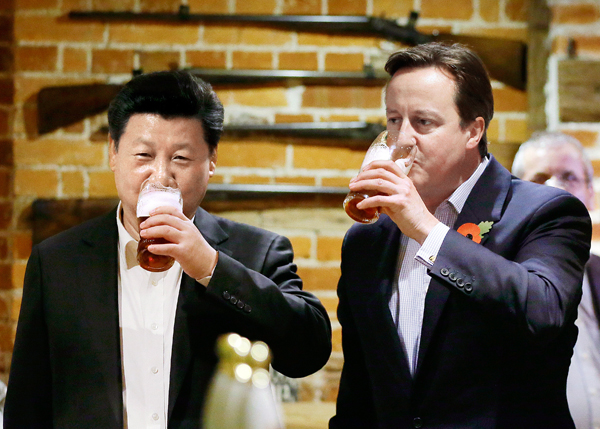 Britain’s Prime Minister David Cameron, right, drinks beer with Chinese President Xi Jinping at a pub in England, Oct. 22, 2015 on the sidelines of Xi’s state visit hailed as a landmark by both China and Britain. [AP/NEWSIS]

The United Kingdom’s exit from the European Union is creating a lot of losers: London’s finance industry. British Prime Minister David Cameron. The pound. The grand cause of European integration. But out of all of the market turmoil and uncertainty will emerge at least one big winner: China.

In the short term, of course, China’s struggling economy may take a hit from the chaos in the EU, its second-largest trading partner. A smaller, less-stable European market and more cash-strapped consumers aren’t good news for Chinese exporters. Over the longer term, though, Brexit is almost certainly in China’s economic and political interests.

Even a fully united Europe — burdened as it is by debt woes, high costs, overbearing bureaucracy and, in some cases, dubious competitiveness — has had a tough time competing and contending with China. Now fractured, the EU can’t help but pose less of a counterweight to China’s rise on the world stage.

Remember why the European Union was formed in the first place. Proponents like to stress the EU’s mission to promote peace and democracy. More practically, a key goal of unification was to enhance the region’s clout in the global economy. The varied nations of Europe understood that they’d be much stronger if they forged a common market with shared institutions and even a regional currency, the euro, than if they tried to compete as independent units. Europe hoped to evolve from a collection of rich but contentious states into a giant economic bloc on par with the U.S. and more recently, China.

In reality, Europe has struggled to fulfill that ideal and has suffered for it. Persistent nationalism has repeatedly limited its ability to forge a common front on both trade and geopolitical issues.

Nowhere has this failure been more obvious than in Europe’s relations with China. As a whole, the EU should in theory wield significant power in pressing Beijing to open its markets and play fair on trade. Instead, European nations have routinely squandered that advantage by competing with each other for Chinese investment and favors.

European businesses would certainly have been better served if the EU could have cobbled together a common policy towards China. While Chinese companies have gone on a major shopping spree in Europe — even buying stakes in beloved football clubs — Merkel, on a recent visit to Beijing, was left griping that foreign firms deserved to “enjoy the same rights and privileges as domestic companies” in China. If she and Cameron and Europe’s other leaders had locked arms and fought for those rights together, they’d have had a greater chance of success.

Now instead, a truncated common market in Europe will undercut the global competitiveness of its companies. European firms — from big banks to tech start-ups — would be much better positioned to take on rising Chinese champions if they were able to capitalize on a full-fledged Europe-wide market.

Politically, too, Brexit can only widen China’s scope for action. As China challenges the West’s cherished institutions and ideals, from navigation rights to human rights, the importance of defending those rules and values is rising steadily. A united EU could have presented a serious check to Beijing’s growing assertiveness. We’ve already seen the alternative: When the U.S. expressed concerns last year about China’s plans to set up a rival to the World Bank, the Europeans stumbled over themselves to sign up, undermining any hope of extracting concessions from China’s leaders.

By choosing “leave,” British voters demonstrated an unfortunate short-sightedness about how the world is changing and how hard it will be for any country with global ambitions to go it alone. With Brexit, both the U.K. and Europe are losing a lot more than a partnership. They’re losing their best chance to stay relevant in a greatly altered world order.