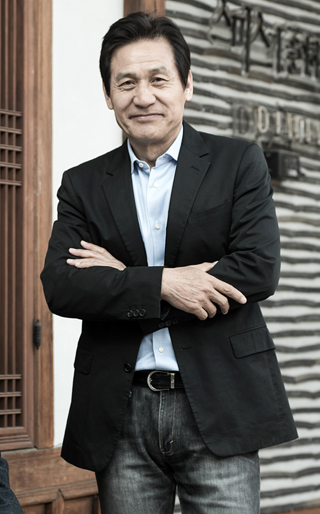 Veteran actor Ahn Sung-ki is happy he got to see a little action in his upcoming film “The Hunt.”

“I was happy and thankful for this movie because [the Korean movie industry] rarely has any action movies for [older actors] while there are more opportunities in the overseas,” he said in an interview last week, citing Liam Neeson’s many films over recent years.

Ahn will celebrate 60 years since his debut next year.

“When I was reading the script, I could imagine myself appearing in the beginning scene of the movie with my hair all blowing as if I’m an animal and that felt good.”

“The Hunt” is about a hunter named Gi-seong (played by Ahn) who stumbles on a group of gold prospectors on a deserted mountain. Not wanting him to expose their location to the rest of the world, the prospectors chase down Gi-seong, who finds himself having become the hunted.

The film will open in Korea on Wednesday.

Q.Would you want to do more action movies?

A. No need to speak more about that. I want to do it no matter what. I felt my heart pumping, and working those scenes wasn’t difficult.

Do you have any movies lined up to celebrate your 60th anniversary?

I have something concrete and another one that’s still in the works. I’m in talks with director Lee Chung-ryoul - best known for the documentary “Old Partner” - about a new film. The story is about a performer from Jin Island who sings and dances while carrying an empty coffin stand the day before a funeral. It is a story of someone who helps people forget their sorrow and tries to bring out some cheerfulness.

What kind of an actor do you want to be?

You recently participated in the show “Running Man.” How was that experience?

It was difficult because what you do on a show can’t be done for a second take. A scene in a movie - you can film it again if you want, but that’s not the case with an entertainment show.

I think those who think too much like me might not be so suitable for such shows. I needed to be attentive and bring in all my thoughts to focus but it wasn’t easy.