[At Home with Her Excellency, Canada] Trading the mansion for something smaller

[At Home with Her Excellency, Canada] Trading the mansion for something smaller 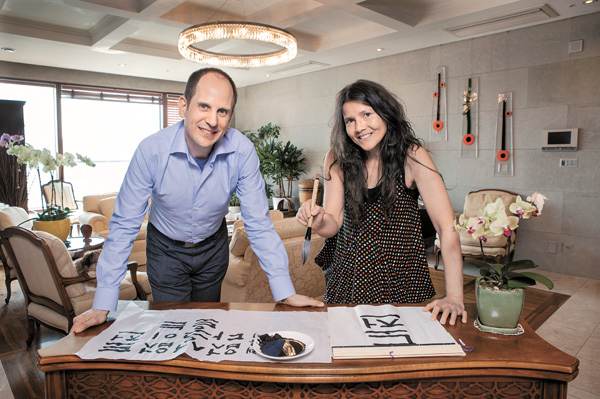 Lucie Tsai, the wife of Canadian Ambassador Eric Walsh, shows off her Korean calligraphy at their home near Namdaemun Market in Jung District, central Seoul. She has written, “No challenge, no success,” a common phrase from her Korean language class. [PARK SANG-MOON]

For an intrepid and adventurous woman like Lucie Tsai - who enjoys braving the bustling lanes of traditional local markets and relying on the subway for long travels - a grand mansion in the upscale neighborhood of Seongbuk-dong, northern Seoul, wasn’t exactly what she was looking for when first moving to Korea.

Her husband, Canadian Ambassador Eric Walsh, felt the same. He wondered whether they were even making full use of the expensive compound.

So the couple moved after a few months to an apartment near Namdaemun Market in central Seoul, almost a third of the previous size and closer to the heart of the city.

The greatest improvement, says Tsai, is finally feeling at home.

Q. Last year, you and Ambassador Walsh made a bold decision.

A. Eric and I have lived in Seoul for a year, and for the first half of that year, we lived with our two elderly cats in a grand house.

The beautiful property belonged to the Canadian government, and many Canadian ambassadors had the pleasure of living there since it was first built around 1987, ’88. We were lucky to have lived there, too.

Nestled on a mountain side, our house was very far away from the hustle and bustle of Seoul city life. It was very elegant - really high ceilings, bright and spacious rooms, a skylight, a kitchen that most restaurants would envy, a piano, a billiard table, a table tennis table… you get the idea.

Our garden was full of flowers and trees, birds flitting and chirping, and an awesome view of Seoul. Our cats happily explored their new environment, playing in the grass and chasing leaves - they weren’t allowed to chase birds.

But I have to admit - despite all these wonderful things, I felt quite isolated there. There were lovely hiking trails outside our door, but not much else. Most of what I wanted to see and do was downtown.

So I often walked 1 kilometer (0.6 miles) to the bus stop, took a 15-minute bus ride down the mountain to a nearby subway station, took the subway into the city and then repeated the whole thing to come back home. It was exhausting.

We sold the big house and moved into a smaller residence acquired by the Canadian government. We moved to the 28th floor of a modern apartment building in the heart of Seoul.

Sadly, both our beloved cats passed away during this transition, but a while after, we were able to adopt two dogs through Empathy for Life, a nonprofit organization.

What a difference inside and out! Our apartment, albeit a lot more modest than our former house, is still very comfortable. We have a small private space which consists of a large master bedroom, a small TV-cum-study room, a bathroom and a walk-in closet.

At the other end of the apartment are two guest bedrooms. In between the two sections is a large kitchen, a representational living room and a dining room. We have balconies and huge windows on both the north and south sides of the apartment, giving us a lot of natural light and good views of the city.

The best part is the location. We live right next to Namdaemun Market. I can find most of what I need right outside my front door. And for a bit of green space with the dogs, I just go up Namsan Park.

I can easily walk to many places: the Canadian Embassy, my Korean class, my bridge class and my dentist. If it’s a bit too far to walk, I just take the elevator down to the subway station, and I’m already on line No. 4. Or, I walk two minutes to one of the many bus stops in the vicinity.

We have some great official Canadian art in our house, owned and sponsored by the Canadian government. The two pieces I’m fondest of are Ken Singer’s “No Longer at Home” (2006) and Gary Olsen’s “Three Black Cows” (1983).

“No Longer at Home” is striking in both size and color. It really pops out and brings a vibrant feel to the living room.

For “Three Black Cows,” which hangs in our dining room, I like how the cows are looking at us with their big brown eyes, quietly approving the fact that Eric and I are vegetarians/vegans.

There are also some pieces we personally own, bought from a friend of ours who’s an amazing Korean-Canadian artist, Gunu Kim. He works with glass, and his creations are unique. We have two of his pieces in our apartment. He does a lot of glasswork, so we wouldn’t call it traditional.

Do you have any Korean touches in your house?

We have a few beautiful Korean decorations that are very meaningful to us because they have been given to us by very dear friends: lacquered boxes, Korean runners (traditional fabric used for decoration) and wedding mallards.

Eric actually bought a pair of wedding mallards a while ago on our fifth wedding anniversary from Gwangjang Market in Jongno District, central Seoul, one of my favorite places in the capital.

Are there any typical features of a Canadian home absent here?
In many parts of Canada during the winter, people can plug in their cars to electric outlets when parking outside overnight to keep its battery from freezing and dying.

Often, people who don’t have a garage have an outdoor plug for their car, and during winter, you might see cars driving around with a plug dangling out of the car’s front grill.

As an avid fan of traditional Korean markets, do you have any street snack suggestions for local tourists traveling to Canada?

None of the foods I’m about to mention are actually healthy for you, but they’re unique to Canada, quite tasty, and vegetarian or have such versions offered.

If you go to Ottawa, visit a market and get in line for a beavertail. This beaver tail-shaped pastry comes with various toppings, ranging from cinnamon and sugar to sour cream and chives.

Next, the famous poutine, which originated in Quebec, consists of French fries covered in melted cheese curds and smothered in gravy.

For people with a serious sweet tooth, try out Nanimo bars, a three-layered chocolate, custard and cookie crumb dessert square, named after a city in British Colombia.

And finally, found in any convenience store is the Coffee Crisp chocolate bar, a crispy mix of chocolate and coffee flavors. You can’t go wrong with any of these delicious Canadian treats.

Clockwise from bottom left: A pair of wooden wedding mallards that Canadian Ambassador Eric Walsh purchased for his wife Lucie Tsai on the occasion of their fifth wedding anniversary sits in their bedroom; Gary Olsen’s “Three Black Cows” (1983), owned by the Canadian government, hangs in the couple’s dining room; a view of downtown Seoul from the balcony of the their apartment in Jung District; glasswork by Korean-Canadian artist Gunu Kim hangs on the side wall of the couple’s living room. [PARK SANG-MOON]