The costly, complicated hurdle of the Toeic

The costly, complicated hurdle of the Toeic 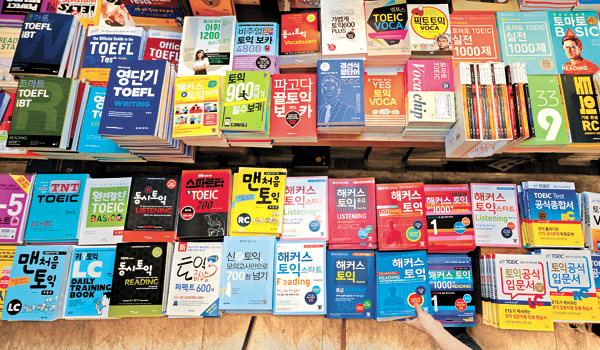 Getting a job in Korea is notoriously difficult, but in the corner of a large bookstore in Gangnam District, there’s a huge stack of textbooks that promise part of an answer.

The textbooks say they can boost scores on the various English proficiency tests required by many companies these days. But the most popular by far are those promising the secret to passing the Toeic.

Short for the Test of English for International Communication, the exam was designed by U.S. company ETS to test the English proficiency of non-native speakers. But for many Korean job seekers, it represents one of the most frustrating barriers to employment.

The trend isn’t new, nor small in scale.

Recently, for example, a group of undergraduate students submitted a petition accusing one university of setting its curfew based on Toeic scores. They claimed their school forbid students from leaving their dorms for two months if they got under a 550 out of 990 possible points. The National Human Rights Commission of Korea (NHRC) stated the move infringed on students’ human rights.

To understand what’s going on and how young people feel about the exam, the JoongAng Ilbo interviewed job seekers in their 20s and 30s who have taken - or are about to take - the Toeic.

The newest version of the Toeic was released May 29, and many test takers felt it had gotten even harder. The listening section had gotten more complex - three speakers now appear simultaneously, as opposed to two - and the reading passages got even lengthier.

Some insiders argue the changes were purely superficial.

“The renewed test may give an impression that it got more difficult because the number of questions that could be solved with certain skills has become smaller,” said Park Jung-in who lectures on the Toeic at YBM, an institution for language tests.

“However, it will not be that difficult for those who already have basic understanding on English.”

Try telling that to Yoon Jung-suk, 27, who has been taking the test for more than two years.

“With some exaggeration, I could’ve studied abroad for a year with the money I spent on the Toeic,” he said. “With the new version of the test, I’ll need to spend even more time.”

She says she attended lectures from a famous instructor and studied with a group of students afterward beginning in March 2015. “The lecturer was so famous that even registering for the lecture was very difficult,” Lee said. About 100 students attended from 10 a.m. to 12:50 p.m. daily

“I still didn’t get the score I aimed for,” she said, adding that she felt her money had been wasted.

In 2015, UnivTommorow Research Laboratory for the Twenties, a research institution that studies people in their 20s, surveyed 500 university students that have been enrolled for more than seven semesters. According to the results, each spent an average 1.34 million won ($1135) to prepare for “specs,” slang in Korea for the specifications needed to make a resume look more impressive.

“The application fee for Toeic costs about 40,000 won. It was burdensome to take the test every month, so I earned money by having part-time jobs.”

In fact, it costs 44,500 won per test to register for the Toeic. Other language proficiency tests are more expensive: the Toefl, another test developed by ETS, costs $185 per exam in Korea, while the British Council’s Ielts costs $330.

The tests represent a substantial economic burden every month, many young people said, and the costs keep climbing.

After the new Toeic was released, the cost to take the exam rose 2,500 won. Capitalizing on the situation, publishing companies soon released the newest editions of their books designed for the new test.

“I can see that the test organizers are trying to make money out of us,” said Yang, a 27-year-old graduate student.

“But I am sorry for myself that I can’t do nothing but follow the trend,” she added with a sigh.

Park, 27, had been preparing for the test since April. He bought a set of books online and paid for downloadable lectures, only to learn that all his materials were suddenly out of date.

“It’s my fault that I bought the books without looking closely into the situation, but it didn’t feel good having to shell out for a brand-new set.” 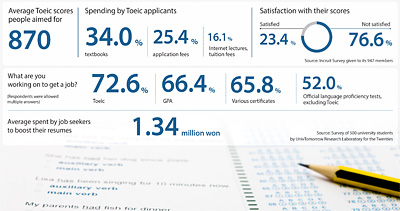 In March 2015, Incruit, an employment information portal, surveyed 946 of its members on how they feel about their spending on Toeic.

About 30.3 percent said they feel like they are wasting their money, and 20 percent were not sure whether a good score would help their employment odds.

The average score aimed for by respondents is 870, according to the survey. The lowest possible score is a 10.

Some experts say that there is a growing trend that companies no longer seek for high scores on English proficiency exams.

“Our company recently conducted a survey of corporations this year. Seventy percent of them said that they don’t require Toeic scores, up from 50 percent last year,” said Im Min-uk, who works in the public relations department of Saramin, a headhunting company.

“This means that companies don’t value applicants’ specifications as much as in the past, so it is important for applicants to concentrate on their own strengths,” she said.

However, she said that many job seekers continue to take the tests, most notably Toeic, because of anxiety as they feel about lagging behind the competition.

While some say the Toeic is not a must for all job seekers, they seem to be in the minority.

Kim, 33, who works at a medium-sized company, continues to take the Toeic hoping it will lead to a better job.

“I heard that corporations don’t value Toeic scores,” he said. “But as I imagine the vacant space at the Toefl score section of my future resume, I can’t stop taking it.”

Park, 27, succeeded in getting employed after receiving a high score on the Toeic. She argues Toeic is mandatory even if the companies say they don’t require it.

“There is a social pressure that we need to get a high score on the test and it isn’t easy to ignore the prevalence of such notion,” she said.

That’s evident just outside of the bookstore in Gangnam District offering Toeic prep textbooks. On the main street nearby Gangnam Station, row after row of English academies advertise their wares. Most include special Toiec prep lectures that people can take on their vacations.