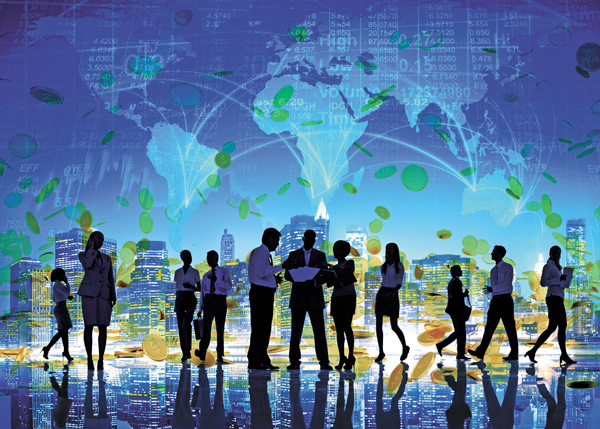 Mrs. Baek, a working mother of two children, recently consulted with a private wealth manager. The total household income of the Baek family is about 6.8 million won ($5,800) a month, including her and her husband’s salaries and rental income from a small “officetel” unit they own.

The 35-year-old working mother was advised to sell the officetel and start accumulating financial assets for retirement.

“We bought the officetel at an auction several years ago to get extra income,” Baek said. “I expected the value to rise quite a lot, but it didn’t reach my expectations. The rental income is just 450,000 won, but we are paying 250,000 won every month for the mortgage.

“Because of endless spending for the children, the mortgage repayment and allowances for our parents, there is nothing much to save for our retirement,” she said. 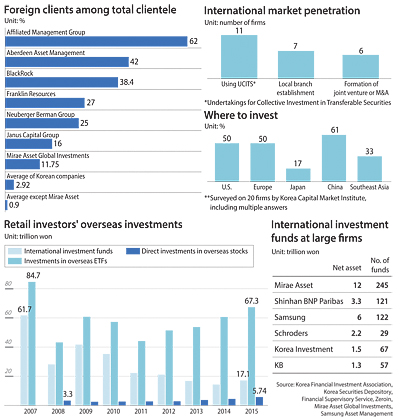 Instead, the adviser suggested that Baek buy financial instruments including a retirement pension fund and some international exchange-traded funds. The government levies no taxes on returns from international investment funds, so they are more than welcome to cash-short people like her.

The asset management sector - the conglomeration of individuals’ investment funds and their management - has historically been a modest slice of the Korean capital market. But now it is being spotlighted as a new growth engine of the Korean financial industry because other financial sectors - securities, bank savings and stocks - are shrinking because of falling profitability and persistent low interest rates. The guiding interest rate in Korea is at an all-time low of 1.5 percent, and many expect the central bank to cut that rate once or twice more this year because of anemic growth.

With no end in sight for the low-interest-rate policy, people are casting about for higher returns. The hunt is especially desperate for people nearing retirement with little to show for it in their bankbooks.

The asset management market looks attractive for its growth potential on three kinds of demand; retirement fund management, a transition from real estate to financial assets and the growing need for higher yields.

Korea’s asset management market, including the pension and small-fund management sectors, could balloon from 670 trillion won to more than 1,500 trillion won by 2020, growing 7 to 8 percent annually. That estimate comes from the Korea Capital Market Institute. The sector’s contribution to the national economy is also expected to increase: from a 52 percent contribution to GDP in 2012, the proportion is forecast to be 70 to 80 percent in four years.

“As the government moves to loosen regulations on hedge funds and private equity funds, there are expectations that the overall size of the country’s asset management could grow, including the National Pension Service fund, retirement funds and insurance funds,” Hwang Young-key, chairman of the Korea Financial Investment Association, said in an interview with the Korea JoongAng Daily. “If these funds continue expanding, Korea could have a 1,000 trillion won asset management firm in the future.”

To grow competitively, financial industry officials say, asset management firms should sharpen their noses to sniff out profitable investments. As part of that search, many also suggest developing a more international outlook is an important task.

Korean asset management firms agree and are expanding their reach outside the country to grow beyond the small Korean market.

The graying of the population here is resulting in an accumulation of retirement funds and falls in yields because of low productivity.

Economically, savings usually rise in an aging society and the total amount of available capital grows. But as retiree numbers soar as a percentage of the total population and the number of economically active people shrinks, economic productivity starts to decline. The popularity of risky financial assets also drops because the older generations are looking for security and stability, not risky growth. As a result, asset prices can fall.

And Korea is a quickly aging country. In 2015, each Korean 65 or older was backed by 5.1 people ages 15 to 64, the economically active part of the population. By 2030, that ratio will be halved to 2.5 workers per retiree, according to the 2015 United Nations World Population Aging Report.

To manage the accumulating funds better, it is crucial for asset management firms to find investments that are both lucrative and safe.

“If the pace of accumulation of funds outstrips the growth of the economy and financial markets, it will be impossible to meet the demand of retirees from the existing asset market,” said Kim Jae-cheol, a researcher at the Korea Capital Market Institute (KCMI). “Overseas investments can offer more investment opportunities and higher yields while reducing risks.”

Since economic growth rates of countries around the world and conditions in their financial markets vary widely, risk can be dispersed while yields can improve, professional fund managers say.

Recently, Korean asset management companies have been expanding their presence across the world.

According to data from the Financial Supervisory Service, 15 Korean firms had a total of 35 overseas branches or subsidiary corporations abroad as of May, more than double from the 14 in 2008.

Samsung has completed a global network connecting key financial hubs when it acquired subsidiaries of Samsung Life Insurance, its parent company, in New York and London in February 2015. The asset management unit of Samsung established its first overseas corporation in Hong Kong in 2007; it is managing international funds invested in China, Southeast Asian countries and India.

“With the acquisition of the New York and London subsidiaries, the company has prepared a solid foothold for increasing investments in global assets,” a Samsung Asset Management spokesman said.

Samsung is looking into the possibility of setting up a joint venture in China to export its exchange-traded funds (ETF). It signed a partnership with a Chinese firm in May to offer its know-how on asset management especially on ETFs.

“Since the Chinese ETF market is estimated to reach 180 trillion won by 2020, the market can be a great source of profits,” the spokesman said. “Establishing a joint venture is a long-term plan. We will release the details to our future plans once we decide whether to search approval by the Chinese authority.”

Hanwha Asset Management is also trying out the Chinese market. The company is awaiting approval from the Chinese financial authorities to establish a joint venture with two Chinese state-run firms with total capital of 300 million yuan ($45 million).

Hanwha is the largest shareholder with a 45.5 percent stake in the joint venture.

“As soon as we get approval, sales operations will begin in China, managing funds that invest in the A-shares of mainland China and the Hang Seng China Enterprise Index,” said a spokesman at the company. “It is not easy for a Korean financial firm to enter China. Because the asset management unit is smaller than other Hanwha subsidiaries, it can serve as a bridge for the others to eventually reach China.”

The asset management unit of Hanwha Group is the first among the group’s subsidiaries to invest in China.

The company’s global ETF business is the largest among local companies, with 179 ETFs from Korea, Canada, Australia, Hong Kong, the United States and Colombia.

“Mirae Asset is the only Korean asset management firm that is selling funds to foreign customers in local markets,” a public relations officer said.

Mirae Asset has also been aggressively investing in overseas properties. Earlier this month, the company agreed to buy the leasehold of the Hyatt Regency Waikiki Beach Resort and Spa for $780 million from Blackstone Group, the biggest single property deal to date for Mirae.

Also this year, Mirae Asset Group and its affiliates have purchased five offshore properties, taking the value of its property acquisitions to more than 2.5 trillion won. The combined figure for the first six months of this year is the equivalent of half of all property investments made by the group since 2006, signaling an increasingly intense appetite for real estate.

The latest purchases include one of Amazon’s eight headquarter buildings in Seattle for an estimated 290 billion won, a deal signed on Friday, according to multiple market sources.

Although the firms have been doing their best to internationalize, experts point out limits to their push.

“They have been making significant efforts in recent years, but they aren’t creating new overseas demand yet,” said Kim at KCMI. “Korean firms are not effectively utilizing the UCITS.”

He was referring to an EU agreement that facilitates the sale of securities by harmonizing national regulations. Korea is a founder of an Asian version of the system, dubbed “Asia Region Fund Passport,” scheduled to be signed by Korea, Japan, Australia and Thailand on Thursday.

“Some firms have established local subsidiaries or branches in overseas markets, but the size and number are still small,” she said.

Since Korean asset management firms in general have low global recognition and the assets under their management aren’t as large as those of true global players, they need more concrete and strategic approaches to go global, researchers say.

“Rather than helping Korean investors earn yields from overseas investments, the companies need to create demand outside the countries to become ‘real global asset management firms,’” she added.

Buying midsize asset management firms in Europe or elsewhere would be one feasible strategy to penetrate into emerging markets like China and other emerging markets, Kang and others suggest.

“For several decades, Europe and the U.S. have been the center of global asset management, so buying local firms there would help establish sales channels, client networks and the localized workforce,” she said.