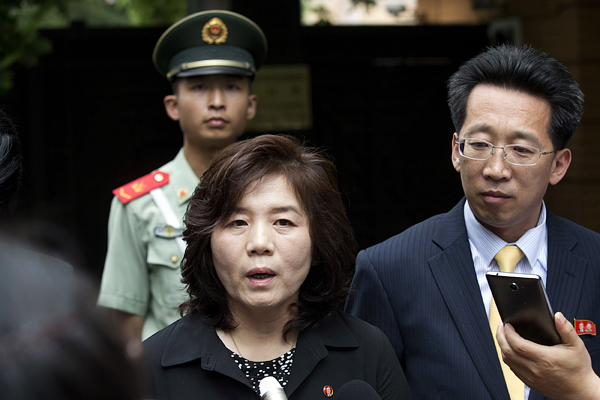 Choi Sun-hee, the deputy director of North Korea’s foreign ministry, seemed relaxed as she stood in front of the foreign press in Beijing on June 23. I had briefly met with Choi in 2007 when I interviewed then vice foreign minister Kim Kye-gwan at Narita Airport in Japan. Nine years have passed, and she is now the North’s representative for the Northeast Asia Cooperation Dialogue, dubbed “mini six-party talks,” and has declared in the face of the American and Chinese representatives that the six-party dialogue is dead.

When asked if Pyongyang was disappointed by China’s changed North Korean policy, she said, “We are not disappointed at all. China is doing their work, and we are doing ours.” On the international sanctions, she said that North Korea “has become used to it.” Her words were far from the expectation or hope that the sanctions would trouble the North.

The stats on trade between North Korea and China released two days earlier show little changes in the total foreign currency flowing into the North. North Korea’s coal exports to China decreased by 28 percent while iron ore exports went up by 46 percent. The margin of loss in the total mineral exports was made up in the apparel exports, which doubled last year. Experience has taught us that China’s sanctions on the North would fizzle out eventually.

Chinese representative Wu Dawei’s remark also confirms why North Korea was not disappointed by China. He insisted on the simultaneous commencement of denuclearization talks and peace talks, and Russia backed the idea. While it is not what Pyongyang insists, it is far from what Korea, the United States and Japan can accept. An attendee said that the difference in position between Seoul-Washington-Tokyo and Beijing-Moscow was significant. In short, when it comes to the North Korean nuclear issue, it is not a five-to-one structure but a three-to-two-to-one structure. Choi seems to have acknowledged that while North Korea is not happy with China’s changed attitude, it is not troubled as Beijing’s voice is still different from those of Seoul, Washington and Tokyo and is still preventing the unity of the five nations.

It won’t be as easy to turn the 3:2:1 structure into a 5:1 as we hoped. It would be even harder to persuade China when Thaad is taken into account. On June 25, Russian President Putin will visit Beijing and is expected to oppose Thaad alongside Chinese President Xi Jinping.

While Seoul tries to persuade them to put pressure on North Korea to give up the nuclear program so that Thaad deployment won’t be discussed, Beijing and Moscow are reluctant to influence the fate of the North Korean system. It’s been nearly four months since the extensive sanctions are put in place. When the current structure becomes fixed, it will only let North Korea buy time. This is what Choi has told us in her return to the international stage.