A few innovators are breaking par

A few innovators are breaking par 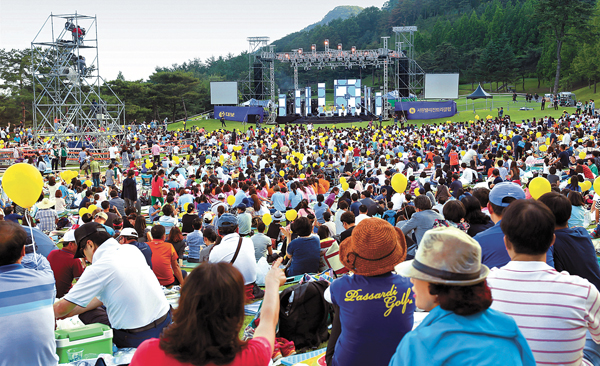 About 40,000 people gathered at a concert at Seowon Valley Country Club in Paju, Gyeonggi, last month. The golf club has been hosting the concert for 14 straight years and the Paju City Government said its economic impact is more than 10 billion won. [SEOWON VALLEY COUNTRY CLUB]

They will invest an eye-popping 1 trillion won ($852 million) or more at the project site of 13 hectares in retail outlets, lodging facilities and several performance venues. A 1,600-room hotel will also be part of the site.

Their plan, the sponsors say, is to transform the image of golf courses, which are now seen by most Koreans as a hangout for rich Koreans only, into that of a resort many can enjoy.

But GA Korea and Korea Country Club had a hard time buying more land due to government regulations saying that “golf courses are only for golfing.”

“Golf courses already have beautiful views, and they have high potential to become attractive resorts,” said Lee Dong-jun, the head of GA Korea.

Korea copied from Japan the regulation that prohibits building houses or arboretums at golf courses. In Japan, owners of private golf courses earned large profits from membership fees, and the government started to ban them from making more profits by operating lodging facilities. The result was that many private courses went broke after membership fee income dropped as Japan’s economy foundered.

Many golf industry executives argue that Korea should not follow Japan’s path.

“The golf industry will be revitalized if the government allows it to build lodging facilities, and greens fees will go down eventually as well,” said Hwang Jin-kook, CEO of IMG Golf Course Management. “The government needs to ease some of the regulatory burdens before the industry collapses entirely.”

In countries such as the United States and the United Kingdom, golf courses become famous tourist attractions when they host golf tournaments. The market size of the golf industry in the state of Georgia, where the Masters Tournament is held annually, is $5.1 billion annually and supports more than 57,000 jobs. There are bridges in the state named after the legendary golfers Ben Hogan and Byron Nelson, and many tourists seek out those bridges when they visit the state.

But golf clubs need to restructure themselves as well. SKY 72, a public golf course in Incheon, lowered golf fees by 30 percent from the savings it saw by sharing equipment to manage the facility with other golf clubs.

Ariji Country Club in Gyeonggi installed solar power panels across the golf course; they generate 1,000 kilowatts a day. Ariji uses the electricity for operating the golf course and sells the excess to the Korea Electric Power Corporation.

Last year, Beacon Hills Golf Club handed over course management to the International Management Group, a sports marketing firm in the United States, the first time a local golf course has brought in a foreign manager.

Acro Country Club, located in South Jeolla, opened its course to public in 2007. Acro also expanded the course and built a hotel in 2014 (which it could do as a public facility). Because of these efforts, it has operated in the black for nine years in a row.

The future of Korea’s golf industry is, in fact, not all that gloomy. There is a golf course for every 100,000 people, and the number of golfers is growing in Korea, while the number is declining in Japan and the United States. There is also a large number of female golfers and screen golf facilities abound here.

Korea also has an advantage of being close to China, where the number of golfers is growing rapidly. “Golf courses in Korea have great strengths such as well-managed layouts and well-trained caddies compared with those in neighboring countries,” said Cho Gwang-min, a sports management professor at Yonsei University. “Golf courses need to start marketing to attract as many foreign tourists as possible by using their strengths.”