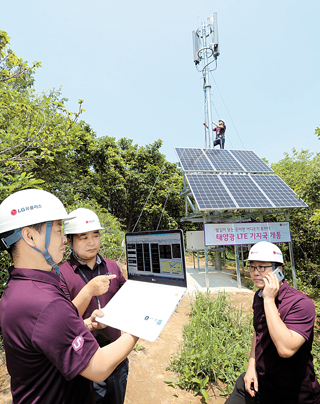 LG U+ employees install solar-powered base stations in the remote areas of Gangwon, providing mobile call services and internet access to a wide range of areas. [LG U+]

DAEGWALLYEONG, Gangwon - LG U+, the nation’s third-largest carrier, has built solar-powered base stations in remote areas where calling and network services were rarely available.

The base stations provide calling and internet network service for areas within a three kilometer (1.86 mile) radius from the station. Four stations are currently installed, mostly in mountain areas including Daegwallyeong, Mount Oseo and Mount Gyeryong in South Chungcheong.

“Network coverage by the nation’s telecommunication providers currently handles up to 99.9 percent of the population,” a spokesperson from LG U+ said at a press tour to its Daegwallyeong site on Friday, “but only about 80 percent of the nation’s land area.”

The spokesperson added, “As more people these days go hiking and visit remote places for leisure, greater coverage has become important not only for casual communication but for emergency situations.”

The LG U+ base stations power themselves through solar panels from LG Electronics and store the energy for timely use through an energy storage system developed by LG Chem.

The carrier plans to expand the number of base stations to 20 by the end of this year, but the challenge is getting approval from the government and related environmental institutions, as stations need to be set up deep within forests or the countryside.

“To build in national parks, you need permission from about six to seven institutions,” a company spokesman said. “But since our base stations are designed to use solar energy and there’s no need for extra cables or facilities to power them, I think we have a better chance of getting permission.”