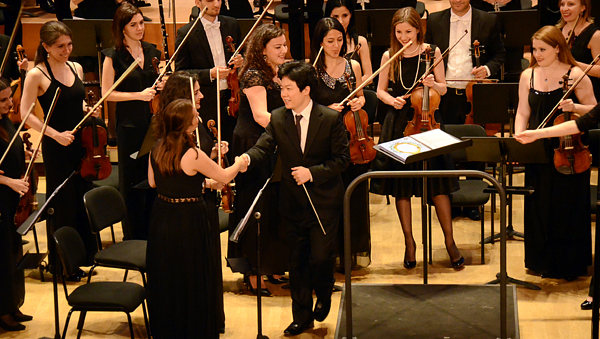 Conductor Park June-sung, who won the Aram Khachaturian International Competition earlier this month, conducted Khachaturian’s 4th Movement of Symphony No.2 “The Bell Symphony” and Tchaikovsky’s Symphony No.5 in the final round. [ARAM KHACHATURIAN INTERNATIONAL COMPETITION]

Earlier this month, Park June-sung became one of the first winners of the Aram Khachaturian International Competition in its newly established conducting category.

Held every June in Yerevan, Armenia, the competition originally featured prizes in violin, cello and piano. It was founded in 2003 to celebrate the work of Armenian composer Aram Khachaturian on the 100th anniversary of his death.

To hear more about his music, the Korea JoongAng Daily talked with the Berlin-based conductor last week via e-mail.

Q. This year, the conducting category was established at the Aram Khachaturian International Competition and you became one of the first winners. What does this competition mean to you and how did you prepare for it?

A. I have always failed to win competitions but kept on challenging myself, in hopes of getting more experience because I didn’t necessarily put much weight on competing with others. Then, there was a sign I’d improved as I made it to the semifinals in The Mahler Competition in 2013. And in 2014, I got the [third] prize at the Bucharest Competition. In fact, rankings in competitions don’t have much significance musically or artistically, but it provides support I use to expand my career. I don’t do anything special when I prepare for competitions. I try to keep up my pace and concentrate on my music.

The same score can become different music depending on the conductor’s interpretation. In the final round, you conducted Khachaturian’s 4th Movement of Symphony No.2 “The Bell Symphony” and Tchaikovsky’s Symphony No.5. Khachaturian’s musical style is very specific, while Tchaikovsky’s music is already widely known. Did you have any trouble interpreting the music in your own way in the final round?

The piece by Khachaturian, which I conducted at the competition, was so powerful and glamorous that I didn’t need any special interpretation. I just tried to enjoy the music.

Also, I chose Tchaikovsky’s Symphony No. 5 for the competition because I like the tune of his music. However, deciding on the tempo was difficult because there are various interpretations of the music. Still, I think I was lucky to have conducted music that I liked in the final round.

What made you start your musical career as a conductor?

First of all, my father is a singer of classical music, so I’ve been learning music since I was young. I heard that my father used to tell my mom that his son will become a conductor, even before I was born. He kept on telling me that I should become a conductor, but at first, I didn’t have a strong aspiration to become one.

But Tchaikovsky’s Symphony No. 4, which was conducted by maestro Chung Myung-whun and played by the Korean Symphony, changed my mind - I decided to start studying conducting after hearing Chung’s music. Now, I am so happy when the specific sound that I imagined while studying a song comes alive. I think it’s what makes conducting attractive.

Which of your teachers have had the biggest influence on your music?

First of all, Mark Stringer’s teachings tremendously influenced me. He taught me that simply swinging hands is just meaningless. ... Jorma Panula taught me how to conduct simply, although the preceding processes may be difficult and complex. … I am currently studying under Christian Ewhald who helps polish my music.

hat do you think is the role of a conductor?

Orginally, I thought conducting meant just teaching and leading others. But now, I realize that it isn’t right at all. I’m still young [so my opinion might change], but I feel that a conductor is a person who listens to others and helps them. But of course, there are definitely times when he or she has to lead others. Therefore, I think a conductor’s personality is also very important.

What is your future plan in your musical career?