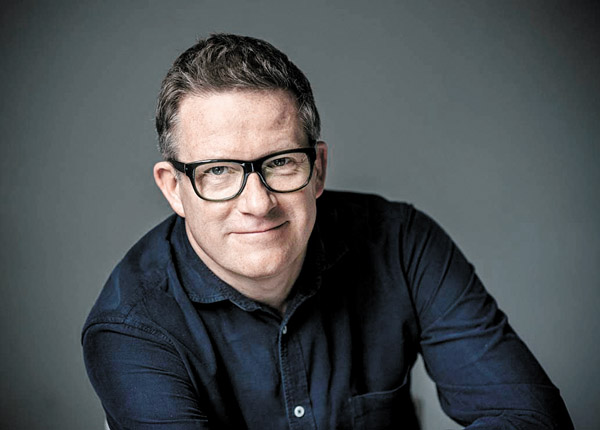 Matthew Bourne knows how to twist conventional stories and woo audiences with his imagination and unconventional ballet moves.

After a series of Bourne’s performances - “Swan Lake,” “Nutcracker!” and “Edward Scissorhands” - stunned Korean audiences, his “Sleeping Beauty” comes to Seoul this month after its 2012 London premiere and 2013 U.S. tour.

Bourne, a Tony Award winner for best choreography and best director of a musical, has been working in the business for about 30 years.

He talked about his dance musical and inspiration in an interview with JoongAng Sunday.

Q. Your previous work often weaves contemporary elements with the traditional. For example, the first part of “Nutcracker!” recalls the novel “Oliver Twist.” While many perceive the combination of stories as satirical of contemporary society, what connects “Sleeping Beauty” and the vampire story?

A. The ballet “Sleeping Beauty” was written by Tchaikovsky in 1890 at the height of the Gothic movement and literature such as Dracula and Frankenstein. The story also asks us to accept the existence of fairies, so why not vampires too… or even vampiric fairies! My ballets are not “satires” though, but just a different way of telling these stories for a modern audience.

Your idiosyncratic “Sleeping Beauty” is not only adapted as a vampire story but includes many other elements. Why did you create a new character, Caradoc, son of Carabosse?

Caradoc was created to make a better story. I wanted to keep the threat to Aurora present throughout the piece and to create a rival for faithful Leo. Sometimes evil is better represented by someone who is charming and attractive. It makes him more dangerous, as the audience is fearful for Aurora but understands why she is drawn to him.

“Swan Lake” created a buzz because of your unprecedented decision to make the swans muscular. In “Sleeping Beauty,” the dark fairy Carabosse and her son Caradoc are played by the same male actor. Why do you continue to change the sex of characters?

Aurora is still played by a woman though! Haha, yes, I like to shake up the stories and change the sex of characters sometimes. It makes people take a fresh look at these universal stories and gives me the chance to create an original take on the familiar tale.

My choreography always serves the story, so in a story that is set in four time periods, I try to reflect the dance styles of those periods. So the 1890 dance is more balletic in its manners, though with many contemporary moves of course, and the 1911 piece uses dance crazes from this era, and the modern day one is more dynamic and threatening.

The “Rose Adage” in the classical version is a show piece for the ballerina including lots of famous balances en pointe. Since we do not do pointe work and are much more concerned with storytelling, we had to come up with a new idea.

You didn’t learn professional dance until the age of 22. But you pioneered the genre of dance musicals. What made you dive into the world of dancing?

Simple answer… As a young man, I preferred moving to speaking! Today I enjoy it still because it’s more of a challenge to tell a complex story without words, and that still excites me.

Do you have any principle of your own when creating a story?

The only thing that would restrict my creativity is my own imagination and who I am as a person. I think my success is down to one thing. I care about audiences.